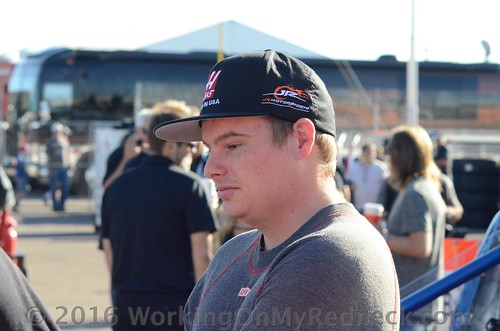 · Cole Custer battled a radio issue and was forced to use hand signals to communicate until the end of Stage 1.

· The No. 00 Code 3 Associates Ford Mustang featured a loose in, tight through the center, and off the corner handling condition.

· Custer raced from 20th to 14th in the final six laps of Stage 2 following a four-tire stop under caution.

· The No. 00 Ford Mustang restarted on slightly older tires after staying out at the end of Stage 2.

· Custer reported that the No. 00 Ford Mustang was tight from the center of the corner through exit near Lap 105.

· The No. 00 came to pit road from the 11th position for four tires, fuel and a chassis adjustment on lap 142 under green-flag conditions.

· He was running 10th when a debris caution came on lap 161. He pitted under caution for four tires, an air pressure adjustment and fuel.

· Custer narrowly avoided a wreck right in front of him on lap 192 while racing in the 15th position.

· He restarted 14th on lap 196 and gained four positions over the final four-lap run to the finish.

· Joey Logano crossed the finish line 0.602 of a second ahead of runner-up Kyle Larson.

· Custer’s 11th-place result was the best among Xfinity series rookies and his second top-15 finish of 2017.

Cole Custer, driver of the No. 00 Code 3 Associates Ford Mustang for Stewart-Haas Racing:

“We started out with some radio problems and then got those fixed. I got better as the day went on with restarts and we definitely had a good long-run car and got better by the end. I was able to make our way up there and got lucky by avoiding that wreck right there at the end. It was right there in front of us. I can’t say enough about all of our guys on our Code 3 Associates Ford Mustang and the folks at Stewart-Haas and Ford for all of their support. It’s been a great first few races and we’re looking forward to the rest of them.”

Do you feel like you’ve got some solid momentum going to Phoenix?

“Yeah, for sure. Our goals were to kind of get through the west coast swing solid and see what we’ve got from there. We’re accomplishing our goals right now and it’s gonna put us in a good spot for the rest of the season.”

The next event on the NASCAR XFINITY Series schedule is the DC Solar 200 on Saturday, March 18 at Phoenix International Raceway. The race starts at 1:30 p.m. EST with live coverage provided by FS1.