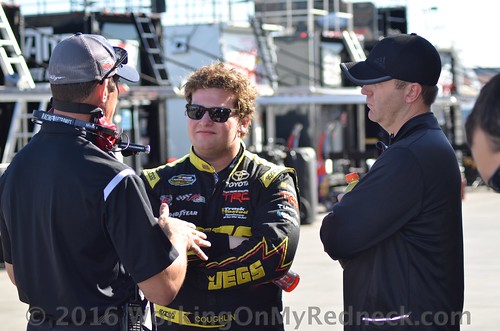 Team Information:
Crew Chief: Michael Shelton
Manufacturer: Toyota
Engine: Triad Racing Technologies
2017 Driver Point Standings: 12th
2017 Owner Point Standings: 15th
Sunoco Rookie of the Year Contender
Chatting with Cody Coughlin:
What is your take on the new racing format and how do you think it will effect racing at Atlanta Motor Speedway this weekend?
“After this past weekend in Daytona, I think the new racing format has shown that bonus points are everything; not just in the NASCAR Camping World Truck Series, but in all three series. Heading into Atlanta Motor Speedway this weekend, I am anticipating aggressive driving, similar to what we saw this past weekend. After this weekend we have a three week break in the schedule, so I think that our main objective is to come home with a solid finish, so that we can carry that momentum forward to Martinsville.”
News & Notes:
Race Information:
Date: Saturday, March 4, 2017
Time: 4:30pm ET on FOX Sports 1
Track: 1.5-mile oval
Distance: 130 laps/200 miles
About JEGS Automotive, Inc.:
In 1960, Jeg Coughlin Sr. founded JEGS as a small speed shop. It has grown into high-performance powerhouse that includes a race team – Team JEGS, 250,000 square foot warehouse, retail store, mail order, and website. The 350+ employees at JEGS still strongly believe and practice our simple business philosophy. Customer Care is #1. For more information about JEGS Automotive, Inc. visit www.jegs.com.
About ThorSport Racing:
ThorSport Racing, based in Sandusky, Ohio, is the longest-tenured NASCAR Camping World Truck Series team. ThorSport Racing, which has competed in the NCWTS since 1996, will run the No. 88 Menards Toyota Tundra driven by two-time NCWTS drivers’ champion Matt Crafton, the No. 13 JEGS/RIDE TV Toyota Tundra driven by Cody Coughlin, the No. 27 Toyota Tundra driven by Ben Rhodes, and the No. 98 RIDE TV/Champion Power Equipment/Jive Communications Toyota Tundra driven by Grant Enfinger. For more information visit www.ThorSport.com.
TIL NEXT TIME, I AM STILL WORKING ON MY REDNECK!