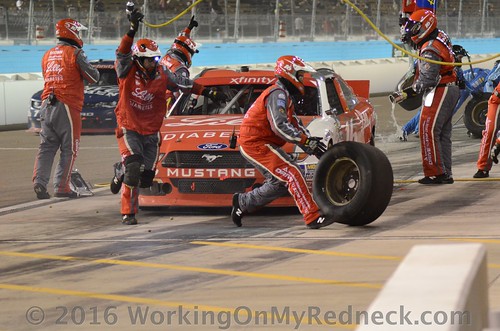 In new rules released Thursday, NASCAR said it will replace its “warning” system with a new series of penalties. Failing inspections repeatedly and other mechanical violations found during the weekend before the race could result in penalties in the new system, such as lost practice time, lost pit selection, starting at the rear for a race or a stop-and-go on the first lap of a race.

The series director will determine those penalties, basing them on severity, timing and recurrence of infractions. Unlike in the past, when a team needed to accumulate four warnings during the year before it lost pit-stall selection, the new system gives the series director more leeway in issuing punishment during the race weekend in which the violation occurred. It also eliminates speculation of what could happen if NASCAR were to confiscate a piece during inspections over the weekend.

NASCAR also will only inspect fuel systems, engines and safety components before the first practice, meaning teams would have limited time to fix issues if their cars aren’t in compliance in the pre-qualifying inspection. In addition, NASCAR will require any car that fails an inspection station to pass all inspection stations again instead of just the one that it failed.

Any prerace violations NASCAR finds that it deems significant could still fall into NASCAR’s new penalty structure, which now has two levels.

Level 1 infractions — which include missing three or more lug nuts in postrace inspection; failing weight, heights or NASCAR’s laser platform; as well as violations of chassis, fuel storage and gear ratio rules — will result in a penalty of 10-40 points, a crew-chief suspension of up to three races and a $25,000-$75,000 fine. Drivers whose race-winning cars violate these rules would not be able to use the victory to qualify or advance in the playoffs, nor would they be able to use the “playoff points” associated with the win.

The same “encumbered win” rule applies to the more serious Level 2 infractions, which include using traction control, unapproved electronics or manipulating the engine or tires. Level 2 penalties could result in a 75-point deduction, a six-race crew-chief suspension and a $100,000-$200,000 fine.

The new system replaces the P1-through-P6 penalty classification which had been in effect since the start of the 2014 season. The new structure grades significant penalties into Levels 1 and 2, both of which involve points deductions and crew chief or team member suspensions that increase with a given violation’s severity.

Elton Sawyer, NASCAR Vice President of Officiating and Technical Inspection, said that in the event that less severe infractions are found before a race, teams or crew members would be disciplined from a menu of penalty options available to NASCAR’s three series directors. Those range from the loss of practice time to loss of lap(s) at the start of a race.

“It’s very similar to a 15-yard penalty. If you can get three 15-yard penalties and you can still win the game or drive down and score a touchdown, then good for you. If we can issue these penalties and you lose pit selection or you start at the back or a drive-through (penalty), and you can still come back and win the race, well then we feel like what that infraction was, the penalty fits the crime.”

A chief reasoning behind the updated policy is to mete out potential penalties more closely to the time – and at the event – in which they occur.

“The Tuesday penalties, they wouldn’t necessarily go away,” Sawyer told NASCAR.com. “We’re hoping that we don’t have to write those penalties. That’s not what we look forward to. We want all the positive storylines to be around the excitement of the race, and as the stewards of the sport — or the umpires, if you will — we want to kind of be in the background. But we have a role and responsibility in this as well to make sure it’s a level playing field for all.”

The updates also detail the schematics of a new pre-race inspection protocol, which requires that vehicles must proceed through all four inspection stations, regardless of whether issues are found in any stage in the process. Fixes must now be made in each team’s garage stall, rather than off to the side of any given station, and then vehicles must proceed through all four inspection sites again.

Sawyer said that the additional time it takes to make a full inspection pass serves as a deterrent for teams, which could miss portions of practice or qualifying in the event of an issue. Eliminating repairs made off to the side of inspection stations also tightens up any gray areas on the fringes of the garage.

“I think it’s fair to say that if we make them go back to the garage, then that’s a central location for all cars to be fixed,” Sawyer told NASCAR.com. “They know they have to come back through every station again, so it does put the deterrent back on the teams and puts the responsibility back on the teams to present their vehicles in compliance with the rule book.”

Among the other highlights from Thursday’s updates to the rule book:

• The penalty structure for violations that rise to the L1 or L2 level were unveiled, subject to enforcement at the following event(s):

L1 penalties concern areas of minimum heights and weights, the Laser Inspection Station (LIS), gear ratios, and flagrant lug nut violations where 17 or fewer are properly secured. L2 penalties involve more egregious infractions concerning tampering with the three “no man’s land” technical areas of tires, engine and fuel. Major safety violations, the use of telemetry or traction control, plus breaches of the testing policy also fall under the L2 designation.

Penalty options for all three NASCAR national series call for the deduction of 10 to 40 points for L1 violations and 75 points for L2 infractions. In the Monster Energy NASCAR Cup Series, L1 penalties call for crew chief or team member suspensions for 1 to 3 races, plus a $25,000 to $75,000 fine. L2 penalties in the Monster Energy NASCAR Cup Series come with a six-race suspension and fines ranging from $100,000 to $200,000.

The disciplinary action is scaled back in the other two national series. In the NASCAR XFINITY Series, L1 penalties will result in the same one- to three-race suspension range, but with fines from $10,000-$40,000. L2 violations in XFINITY events also come with a six-race suspension guideline, but a $50,000-$100,000 range for fines.

• Specific penalties were outlined for lug-nut and LIS violations in the Monster Energy Series.

LIS infractions discovered after Coors Light Pole Qualifying will result in a team’s time being disallowed. Post-race, the violation falls under an L1 heading with a three-race crew chief suspension, a $65,000 fine and the loss of 35 championship points.

Teams with one improperly attached or missing lug nut post-race are subject to a $10,000 fine. That fine doubles and includes a one-race suspension for the crew chief if two lug nuts are improperly attached or missing. If three or more lug nuts are in violation of the rules, the penalty rises to the L1 level with three-race suspension for the crew chief, a $65,000 fine and the deduction of 35 championship points.

• “Encumbered” finishes — a rules concept introduced before the Monster Energy Series’ playoffs last year — will remain in effect this season for post-race L1 and L2 violations. The rules allow a victory to stand in the event of an infraction, but a winning team will be stripped of the benefits associated with the win.

• The list of pre-race penalties within a race weekend at the series directors’ disposal, in order of increasing severity: Loss of annual “hard card” credential, loss of practice time, loss of pit selection position, tail of the field penalty, a green-flag pass-through on pit road after the initial start, a green-flag stop-and-go in the pits after the start, and lap(s) penalty.

• Sawyer said that NASCAR competition officials will continue the practice of taking select cars back to the R&D center for further inspection after a race weekend.