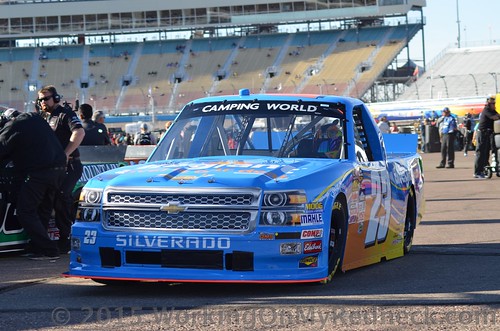 Gallagher will compete in Friday night’s season-opener at DIS in the No. 23 Allegiant Travel Chevrolet before participating in Saturday’s NXS race. Gallagher has three career starts at the 2.5-mile superspeedway — two in the NCWTS and one in the NXS, with a best finish of eighth in the July 2016 NXS event.

Following the first race of 2017, Elliott will head up the No. 23 Allegiant Travel team at Atlanta Motor Speedway. Making his 11th series start, it will be the first NCWTS event for the Dawsonville, Georgia, native at his home track. Elliott’s NCWTS résumé includes one win, six top-fives and eight top-10 finishes. He drives the No. 24 NAPA AUTO PARTS Chevrolet SS in the NASCAR Cup Series for Hendrick Motorsports.

GMS Racing crew chief Jeff Stankiewicz will lead the No. 23 All-Star Team. Stankiewicz has been atop the pit box for 108 NCWTS events, amassing two wins, 15 top-fives and 40 top-10 finishes. Both of his wins came last season with Kyle Larson (Eldora Speedway) and Grant Enfinger (Talladega Superspeedway).

Additional drivers for the No. 23 team will be announced at a later date.