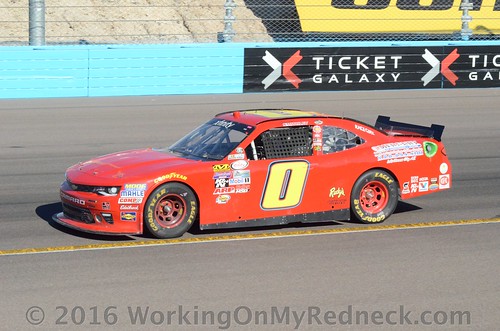 Veteran NASCAR team owner Johnny Davis will attack the 2017 Xfinity Series schedule with a young but experienced group of drivers.

Davis, owner of JD Motorsports with Gary Keller, one of the NASCAR garage’s most established teams, announced Tuesday that Ross Chastain, Garrett Smithley and Harrison Rhodes will drive the team’s Chevrolets in NASCAR’s No. 2 series this season.

Chastain, 24, returns to JD Motorsports for a third straight season, while Smithley, also 24, is back with the team after his rookie year last season. Rhodes, 23, drove for JD Motorsports in 2015 and is returning for another full-season run this year.

“We feel like we have a great young group of drivers who will give us a three-way shot at doing well this season,” Davis said. “We know what all of these guys can do, and all of them have run a lot of laps with us. So we won’t be starting over. It’s more like a continuation of where we’ve been headed.”

Smithley, from Peachtree City, Ga., had a series of strong runs in his rookie season, finishing 18th in driver points despite missing the season-opener. He had eight top-20 runs, with a top finish of 12th at Talladega Superspeedway.

“It’s good to be back with Johnny and his guys,” Rhodes said. “I feel like we built something pretty good here in 2015, and I’m anxious to get going again.”

The new Xfinity season, scheduled to start Feb. 25 with the PowerShares QQQ 300 at Daytona International Speedway, will present entirely new challenges as NASCAR has changed race formats to three segments. Points will be awarded to lead cars at the end of each segment, with accumulated points also figuring into the totals that will determine playoff teams.

“It’s going to be a different kind of season,” Davis said. “The changes are going to make it interesting for our team. I think it will give us opportunities to show our strengths and to surprise some folks. I’m looking forward to getting on the road later this month.”