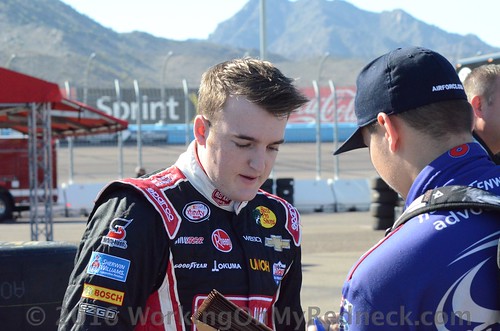 Beginning in 2017, Ty Dillon will take over full-time driving duties of the No. 13 GEICO Chevrolet SS in the NASCAR Sprint Cup Series for Germain Racing. Dillon follows Casey Mears, a seasoned veteran who, over the last six years, has helped build Germain Racing’s NASCAR Sprint Cup Series program into a viable organization that has garnered the respect and attention of NASCAR’s elite.

The 24-year old Dillon has made 17 starts in the Sprint Cup Series for several different teams, including Circle Sport/Leavine Family Racing and Stewart-Haas Racing. He scored a career-best sixth-place finish at Talladega Superspeedway in May 2016 while serving as a relief driver for Tony Stewart.

“I have been preparing for this next step in my career for several years,” Dillon said. “With my experience in the Camping World Truck Series and XFINITY Series, I am ready to drive full-time in the Sprint Cup Series. I want to thank Bob Germain and the entire Germain Racing organization for giving me this opportunity. It will be an honor to represent a brand and sponsor like GEICO which has played such a significant role in the sport for so many years.”

Germain Racing notched two NASCAR Camping World Truck Series Championships and two top-10 points finishes in the NASCAR XFINITY Series before making the jump to the nation’s top racing series. Since the inception of their Sprint Cup Series program in 2009, the team has established itself as an accomplished restrictor-plate program, while also achieving success at the series’ road course events. With the switch to Chevrolet and the addition of Richard Childress Racing as a technical partner in 2014, they have experienced improvement at the challenging intermediate tracks. Team owner, Bob Germain, aims to continue making progress in the coming years.

“First of all, I want to thank Casey Mears for everything he’s done for our race team over the past six years,” Germain said. “He’s been an integral part of our growth and a great representative for GEICO and our many partners. Bringing Ty onboard is an exciting opportunity for us and we are committed to giving him all the resources he needs to reach his full potential. He’s a very talented driver and first class young man. I’m looking forward to working with him, as well as expanding our relationship with RCR.”

RCR’s partnership with Germain Racing includes technology sharing, research and development, and engineering under the Chevrolet banner. Germain Racing will also continue to utilize the highly reliable and powerful engines from ECR Engines.

“Ty has done an exceptional job for us at RCR in every series he has raced in,” said RCR Chairman and CEO, Richard Childress. “He has won races at each level and competed for championships every year. Ty is a passionate driver and has shown that he is ready for the highest level of stock car racing. I’m proud of him and I am confident he will succeed. I have a lot of respect for Bob Germain and the organization he has built, and I know he and Ty will be successful together. I also look forward to Ty’s continued involvement in RCR’s XFINITY Series program.”

Back in October there was some rumors floating around the garage area that there was this possibility that this was in the works. I wrote a post reflecting those rumblings!

The puzzle is starting to fill in some of those pesky tough little pieces!