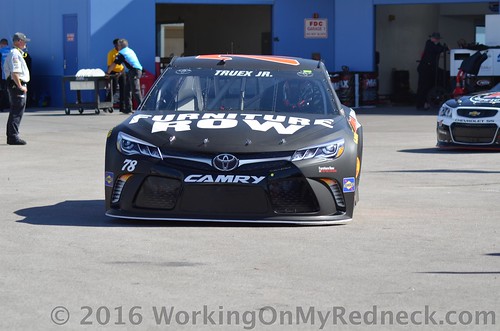 It would be hard pressed to see any signs that Martin Truex’s competitive spirit has wavered after being eliminated from the Chase playoffs two weeks ago.

Truex, driving the No. 78 Bass Pro Shops/TRACKER Boats Toyota, was in contention for the victory in Sunday’s rain-delayed and rain-shortened race at Texas Motor Speedway. But when the scheduled 334-lap race, was called with 41 laps remaining the Furniture Row Racing driver had to settle for a third-place finish.

Truex, who led 66 laps at the high-speed Texas 1.5-mile oval, was poised to post his fifth victory of the season. He was leading the race with a comfortable 2.3-second margin when a caution came out on Lap 257. But after a pit stop for four fresh tires and fuel, he barely got beat off of pit road by Carl Edwards, who went on to claim the victory.

“The rain didn’t come at the right time for us,” said Truex. “I needed for the race to go all the way. We were really good on long runs and that was going to be our only chance to win. But the guys gave me a great car and everyone did their job.

“We weren’t that good in our practices on Friday and Saturday, but we came back today with a fast hot rod. We’re all a little disappointed finishing third. We want to win races and we have two more to go to try to get to Victory Lane.”

Another obstacle that Truex had to deal with after losing the lead was that he was not in the preferred lane on the late restarts.

“The inside (lane) restarts were really hard to hang on to,” noted Truex. “The leader on the outside has a big advantage. We gave it our best and just came up a little short.”

Truex is currently ranked ninth in points, the highest position outside of the Round of 8 Chase drivers.

The race had 12 lead changes among eight drivers and there were eight cautions for 37 laps. The start of the race was delayed for six hours due to rain.

The next Sprint Cup race is Sunday Nov. 13 at Phoenix International Raceway. After Phoenix the 2016 season closes out Nov. 20 at Homestead-Miami Speedway.