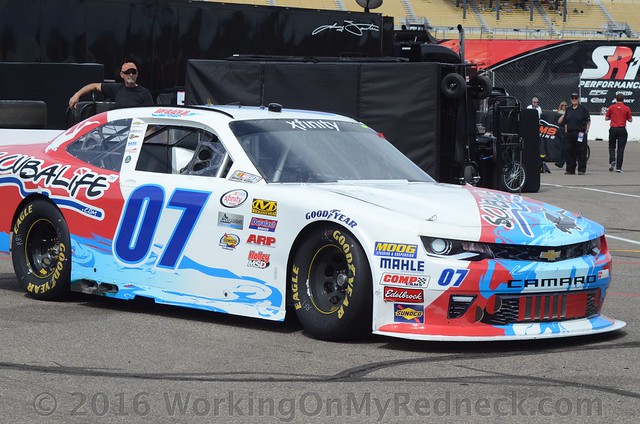 NASCAR XFINITY Series (NXS) competitor Ray Black Jr. will have a busy two weeks ahead of him, as the driver of the No. 07 ScubaLife.com Chevrolet Camaro will compete in the Ticket Galaxy 200 at Phoenix International Raceway on Saturday before heading to Las Vegas with sponsor ScubaLife to make an appearance at the 2016 DEMA Show.

DEMA, the Diving Equipment & Marketing Association, is an important convention for Black and his sponsor, as it’s an opportunity for them to showcase the benefits of becoming a member of ScubaLife to industry peers and expose them to NASCAR at the same time.

“I’ve been going to DEMA since I was 12 or 13 years old,” explained Black. “We’ve been bringing a car to it since I was 15 when I was getting into Late Models. It has always a fun convention to go to and an important one. It’s where everyone in the diving business, from resorts and surfing shops to military organizations and local dive shops, come together to show off new technology and products that shape the future of our industy. We get to show them what ScubaLife can offer their businesses, as well as expose them to our NASCAR ties, which they may not have known about beforehand.”

ScubaLife has been attending the DEMA convention since 2007 and appreciates Black’s involvement in the show.

“DEMA is important to us at ScubaLife as it is a way for us to communicate with our core members and the diving industry in general,” said Allen Garber, Chief Operating Officer of ScubaLife. “Having Ray there is a great way for us to draw attention to ourselves. He is a big attraction for show goers. We’ll have the No. 07 ScubaLife.com Chevrolet on display throughout the show and Ray will be signing autographs for fans during one of the afternoons. He’s a big help in promoting our ScubaLife Membership and all the benefits we offer, such as professional insurance and travel discounts, to diving enthusiasts.”

For Black, attending the show is a nice mix of promoting his sponsor while also reconnecting with old friends in the diving industry.

“I really do enjoy going to DEMA,” said Black. “It’s a great way to introduce our friends and colleagues in the diving industry to what ScubaLife is doing both in the water and on the race track while also giving me the chance to visit with friends I’ve made from past visits to the show. It’s really good to be able to see everyone again.”

Before Black hits Las Vegas for the 2016 DEMA Show, he will first turn his attention to the upcoming race weekend at Phoenix International Raceway. Black earned a 25th place finish during the spring race at the one-mile track earlier this season after an oil line broke during practice and forced him to compete in a backup car.

“I like racing at Phoenix,” said Black. “There are multiple racing grooves even with it being a shorter track, which really makes it a lot of fun. We have a lot more experience as a team in the XFINITY Series at this point of the season than we did back in March, so I’m expecting us to perform even stronger this time and grab a Top-20 finish!”

Fans can catch Black competing in the Ticket Galaxy 200 at Phoenix International Raceway on Saturday, November 12 at 7:30 p.m. EST. Live race coverage can be found on NBCSN and via MRN Radio.