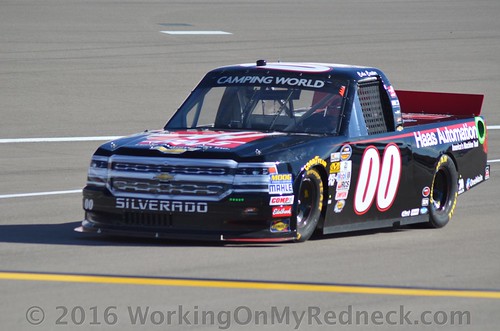 Cole Custer drove a smart, heady race on Saturday at Martinsville Speedway, bringing his No. 00 OneMain Financial Chevrolet Silverado home in seventh spot. The top-10 result, Custer’s 11th of the season and fifth in the last six races, was a good day’s work, but had some things worked out differently, it could have been even better.

Custer qualified third on Saturday morning and showed from the green flag that he had a very quick OneMain Financial Chevy. Breaking with polesitter Chase Elliott, he settled into the top two early on and took the lead on the 11th lap. He held it until lap 28, when Johnny Sauter slipped to the inside and took the top spot. Sauter led to the first caution at lap 51, and Custer hit pit road with the rest of the field. After taking four tires and fuel and getting adjustments to air pressure and wedge, Custer went back out second behind Elliott.

On the restart, Elliott and Custer broke cleanly and retained the top two spots, as Sauter and Daniel Suarez joined them in a four-truck breakaway. It ran like that until the second caution at lap 109, when Custer headed back down pit road for four tires and fuel. Crew chief Marcus Richmond took some of his earlier adjustments back out, and sent his young charge out in second, alongside Elliott. It was more of the same for the next stint, and the caution waved again at lap 151.

Custer came back down pit road for four more tires and fuel, this time putting on a scuffed set. That put Custer back in sixth spot for the run to the checkers, and it also put him on the outside for the restart, which is not the place to be at Martinsville. He made a couple of good moves to advance up to fourth, but two more restarts proved to be more difficult and he finished seventh.

For Custer, it was a solid weekend. He qualified third, the second-best starting position he’s had on the .526-mile oval at Martinsville, and he led laps for the fourth time in the last six races. The 17 laps he paced the field were the third-most this season, behind the 39 he led at Canadian Tire Motorsports Park and the 18 he led at Michigan.

Custer jumped one spot in the points to ninth, four points ahead of Tyler Reddick.

“The last 50 laps or so, when we got stuck on the top, didn’t help us at all. The first two long runs, I thought it was a tossup who had the best truck between us and the 71 [Elliott]. I think we were a little bit better than the 21 [Sauter], but it was something with the tires or something was a little bit different. I just couldn’t get into a rhythm on the last run and wasn’t able to pass those guys who got by us on the restarts. We had a really strong OneMain Financial Chevrolet, but it was just…what happens at Martinsville.”