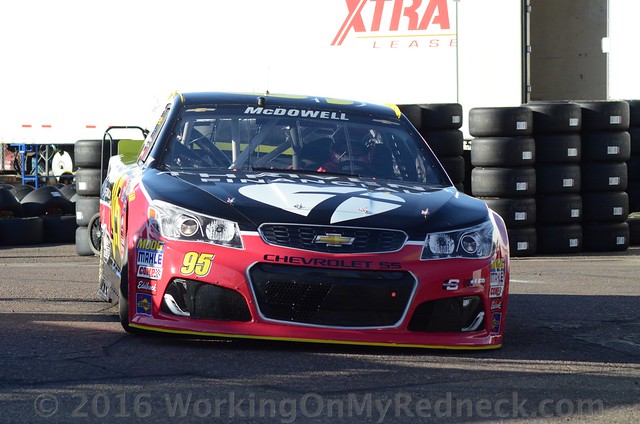 Michael McDowell is looking forward to returning to Martinsville after earning his eighth Top-20 finish this season during last weekend’s Hellmann’s 500 at Talladega Superspeedway. McDowell and Circle Sport – Leavine Family Racing (CSLFR) have recorded career best finishes at fourteen different tracks this season and are hoping to add another to that list this weekend.

McDowell’s first NSCS start at Martinsville on March 30, 2008 ended in a 26th place finish, twelve positions better than his starting position. His current career-best NSCS finish at the short track is 24th.

“Martinsville is another great short track,” McDowell stated. “Our short track program has been really good this season and we will look to build off what we learned at New Hampshire and Richmond at this race. I think we will go to Martinsville and have another solid run. It’s one of my favorite racetracks – I love Martinsville.”

McDowell will pilot the No. 95 Malwarebytes Chevrolet SS in the Goody’s 500 at Martinsville this weekend.

Malwarebytes partnered with CSLFR earlier this year after head engineer Dave Winston’s computer was infected by TelsaCrypt Ransomware and important data was held at ransom. The team was able to pay the ransom in bitcoins and retrieve the files. Shortly after the incident, Malwarebytes was installed on all team computers to prevent anything like this from happening again.

“Malwarebytes will be on the car as the primary sponsor this weekend,” said McDowell. “I’m looking forward to a fun weekend with them and coming home with another great finish for them. They’ve been a great partner for our team and we’re glad to be able to introduce them to NASCAR.”

The Goody’s 500 will take place on Sunday, October 30 where McDowell and CSLFR plan to expand on their list of solid short track finishes. Race fans can tune-in to NBCSN for live coverage and follow @CSLFR on Twitter.