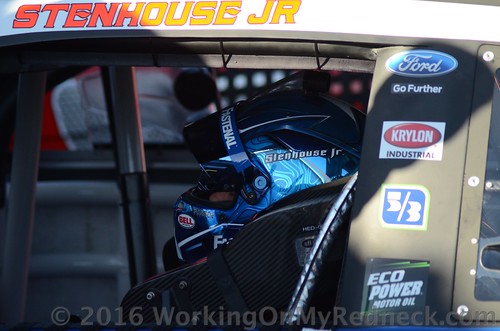 After the No. 17 Fastenal Ford was turned bringing out the final caution of the 300-lap race, Ricky Stenhouse Jr. recovered to take the checkered flag for the Bad Boy Off Road 300 at New Hampshire Motor Speedway in the 24th position.

“We struggled this weekend,” Stenhouse said. “At times our Fastenal Ford handled great but we just lacked speed. It’s definitely not the performance we wanted but we will go back and look at everything and bring something different next year. We need to take the next eight races and build off them going into the off season.”

After struggling with a loose handling Fastenal Ford in practice on Friday, the two-time XFINITY champion advanced to the second round of qualifying earning a 21st –place starting position.

After going a lap down due to a long green flag run, the Olive Branch, Miss. native took the wave around to get back on the lead lap in hopes of a quick caution before he needed to pit for tires and fuel. The much needed caution was never displayed forcing Stenhouse to make his scheduled pit stop under green flag conditions.

With less than 10 laps remaining, Stenhouse made contact with the No. 27 machine which sent the Fastenal Ford for a spin. The 2013 NSCS Rookie of the Year saved his spinning machine without making any contact.

For the final six lap shootout, Stenhouse lined up in the 25th position and was able to pick one more position to cross the finish line in the 24th position.

Stenhouse and the No. 17 team travel to Dover International Speedway on Oct. 2, 2016 for the Citizen Soldier 400. Race coverage starts at 2:00 pm EST on NBCSN.

Kes Is A Bridesmaid At Vegas Once Again