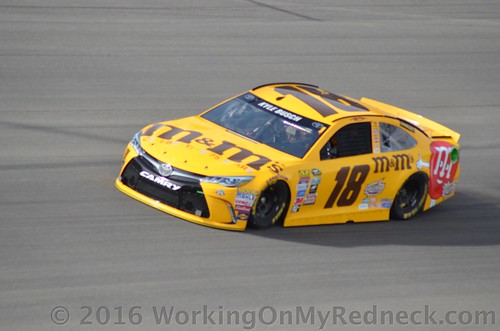 Friday night Kyle Busch left the XFINITY race in a huff and called “Blazingly Bad” Brad Keselowski a dirty driver for his part in the crash involving KyBu and Kes towards the end of the race.

Sunday Kyle Busch was involved in a multi-car wreck when a part broke on his car while running 2nd in the Pro Bass Shops NRA Night Race at Bristol Motor Speedway on lap 357. Busch led a race high 256 laps.

Q) What broke to end your race?
Kyle Busch: “I don’t know. It’s a shame. The last few times we’ve been here, we’ve had really fast M&M’s Toyota Camrys and we haven’t been able to finish. We’ve been having parts failures here, so something we’ve got to address and fix. I’m really tired of losing races here with parts falling apart, so they’ll hear about it on Tuesday. But the person that’s really the biggest moron out there is the spotter of the 46 and the driver of the 46 (Michael Annett). I’ve been wrecking for half a lap and they just come on through and clean us out. That’s stupid, so I don’t know – frustrating day. Let’s go home.”
Q) Did a part eventually break?
Busch: “It finally did break and it was breaking, but it finally did break and I couldn’t hold onto it there and it spun out and then spun out the wrong way and it’s frustrating. We’ve had really, really fast race cars here. The guys do a great job setting them up, but, man, we’ve got parts failures, you know? You can’t have parts failures in this business. That’s stupid. My Camrys have been fast. We’ve just got to stop making stupid mistakes that take us out of races and beyond that the 46 (Michael Annett) spotter needs fired and the damn driver too. He’s an idiot. I’ve been wrecking for half a lap and they come through and clean us out. I mean, there’s plenty of room to miss me. Everybody else seemed to be able to do a good job of it.”(Toyota Racing)
Allgaier’s comments on the wreck: Justin Allgaier, who subbed for an ill Michael Annett in the #46 Pilot Flying J / Battle of Bristol Chevy comments on what happened in the wreck:
Allgaier: “Well from my point of view we got done in the corner. I was trying to let the leaders go as best I could. We were a couple laps down right there and let them go. The #22 (Joey Logano) ducked in front of me getting into (Turn) 1 and I had to jam on the brakes pretty hard. I got really loose and I was just trying to catch it. That is when the spotter was telling me that the #18 (Kyle Busch) was spinning and he kept rolling down the hill so at first I committed to go below him because I was already on the bottom and then he was still coming down the hill so I tried to go out around the outside of him and unfortunately I just didn’t make it. The #22 was right there and just really a shame. I hate it for these guys. This Pilot Flying J #46 team they did a good job all day. We weren’t up there battling for the lead, but we had a good solid day going. I just cost us a decent finish. Thanks to them for letting me drive the car today. Sorry to Kyle (Busch) that is the worst possibly scenario when the leader spins out and you hit them. Just really frustrating.”

In a racing facility that is known for its food blender type of races, crumpled sheet metal, bruised egos, as well as lost tempers, it is somewhat inconceivable to think that a car can spin out and not be T-boned or pile driven by another competitor.  When the race pace is turning laps every 15:30 seconds, and the bank angle of the turns are approx. 24 degrees blocks the vision around the corner, you can just count on getting hit when you spin out or come to an abrupt stop on the racing surface.

Therefore, Kyle Busch really ought to take a chill pill, suck it up, and realize that it was “Bristol Baby”!