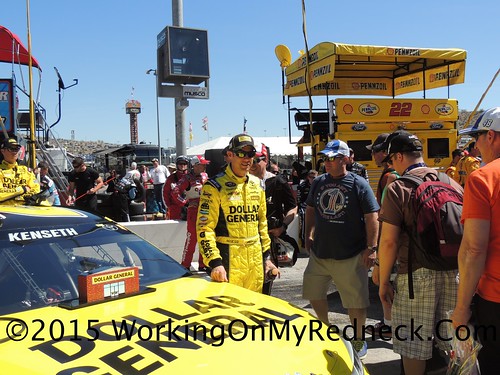 The master of the NASCAR deadpan and extremely dry wit, Matt Kenseth delivered again when asked about whether his future would be affected by Erik Jones’ one-year deal at Furniture Row Racing.

“I think it’s actually Carl (Edwards) but don’t tell anybody,” he said with a wry smile. “I think Carl’s on the hot seat. It’s either Carl or Kyle (Busch). I’m not sure which one.”

Kenseth actually has no insight into the news that Furniture Row Racing owner Barney Visser isn’t expecting Jones, who currently drives for Joe Gibbs Racing in the Xfinity Series, to return to his team after his rookie season in Sprint Cup. Furniture Row Racing is expanding to a field a No. 77 Toyota for Jones, teaming with Martin Truex Jr.‘s No. 78.

Multiple sources have told NBC Sports that Jones could return to Joe Gibbs Racing in 2018 or 2019, and that several scenarios are being considered depending on the future status of drivers and sponsors. Gibbs has Denny Hamlin, Kenseth, Edwards and Busch under contract in Sprint Cup through next season, and the team also has Daniel Suarez running for a second consecutive full season in the Xfinity Series.

Kenseth, 44, said he hasn’t discussed “the master plan for 2020” with team owner Joe Gibbs, though he was made aware of Jones’ move to Furniture Row in 2017.

“I’ve been involved in a lot of those talks, so I knew that was happening, but I can’t say we’ve ever sat and had the conversation as to what exactly is 2018 going to look like and 2019,” he said. “I don’t think anybody probably knows 100 percent sure.”

The 2003 series champion is sure he isn’t considering retirement. Kenseth, who has raced in NASCAR’s premier series since being named its top rookie in 2000, has two victories this season to qualify for his seventh consecutive Chase for the Sprint Cup.

“There’s been times where I’ve been asked about (retirement) a lot,” he said Tuesday after a news conference at the NASCAR Hall of Fame, where a Tide sponsorship on his No. 20 Toyota was unveiled for the Southern 500. “Maybe you’re not running as good and then you start thinking about it, ‘Well, maybe is it time?’

“I don’t really feel like I’m that close where I really can put a date on it to be honest. I feel great. More times than not, I’m having fun. I feel like we’re really competitive more times than not. And we’re capable of winning races, and I think we’re capable of winning championships. That’s just way on the bottom of my list of things to think about or worry about at the moment. “

Gibbs said it’s “probably unclear some right now” what will happen with Jones after 2017, but the team owner said Jones would remain in Sprint Cup and wouldn’t return to the Xfinity Series with JGR.

Could Jones return to Joe Gibbs Racing in a Cup car?

“I think Furniture Row wanted to make this step to go to two cars, so their future is going to be two cars,” Gibbs said. “And whatever their future is past that, it’s up to them. I think it’s kind of what Erik does. Does he stay there longer than that? That’s the question.”

“It’s whatever Furniture Row wants to do,” he said. “They came up with the sponsor and are going to be footing the bill for everything. They’re going to be ramping up out there.

“I’m sure that 5 Hour is going to have their option of what they want to do. I think Furniture Row is going to try to put together their future. They’ve done a real good job of putting this thing together.”

Gibbs said his team is in negotiations on a contract extension with Hamlin, who is signed through next season.

This is just another piece of the puzzle that will affect what happens to Erik Jones after the 2017 season!