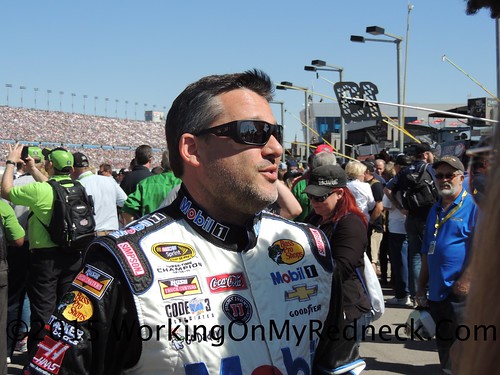 What Boles gave him was something that focused not on Stewart’s final Brickyard 400 but rather the first Brickyard he won back in 2005, when he climbed the iconic catch fencing that was removed during the renovations made in preparations for this year’s Indianapolis 500.

Stewart got a piece of the old fence to keep forever.

As IMS had done for Helio Castroneves, who started the fencing-climbing trend when he made the climb after winning his first 500 in 2001, Boles said he gifted Stewart the portion of old fencing he climbed for “doing something unique” in being one of the few drivers to make the climb.

“If you do it on the new one, I’ll take that fence down and give you some of that, too,” Boles joked as he presented Stewart with the piece of fencing, encased in a large black display case with several pictures of Stewart’s climb.

“This place is really special to me, and this is really cool,” Stewart said, holding the fencing. “I don’t know where this is going to go, but it’ll go somewhere really, really special.”

Gifts like these Stewart can treasure, but otherwise he said he doesn’t want much ceremony for his final Brickyard on Sunday.

Stewart told Boles several weeks ago that he didn’t want to make a big deal out of his last race at IMS purely because he isn’t approaching it that way. Focusing on the race is at the forefront of his mind, not the emotions or memories. And frankly, he feels better than ever going into it.

“I’m probably more prepared for a Brickyard than I’ve been any other year,” Stewart said. “You guys can ask me all you want about how I’m feeling, thinking, whatever, but you’re wasting my time and your time because all I care about is driving that race right now.”

This is Stewart’s farewall race at this iconic racing venue.  It will be very interesting to see how Smoke fares when the checkered flag waves Sunday evening!