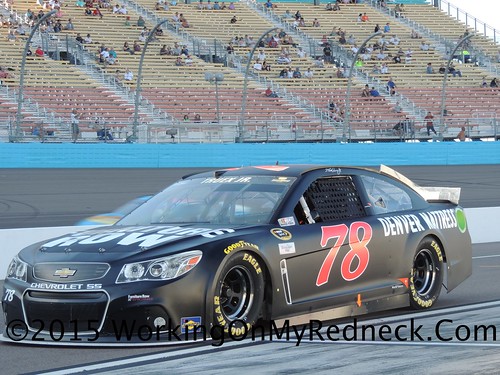 The curse, jinx, hex, whammy, voodoo, spell continued for Martin Truex Jr., who once again saw victory slip away as a result of an oddity late in Sunday’s Sprint Cup Series race.

“I don’t know when our luck will change, all I know is that we’re bringing really fast cars to the track and contending for the win,” said Truex, who led 47 laps. “It’s got to turn around, we’re too good of a team not to have a victory by now.”

Truex, who had a freak mechanical issue with a brake head bolt breaking last week in Kansas that cost him the victory, suffered more bad luck with 46 laps remaining in the 400-lap race at Dover International Speedway. He eventually settled for a ninth-place finish, thanks to an incredible comeback with a heavily damaged race car.

When the caution came out on Lap 342 Truex was in command of the race as it appeared that he and the single-car Furniture Row Racing team were on course for its first victory of the season.

Truex, who came down pit road to take four tires restarted fourth while the first two cars Matt Kenseth and Jimmie Johnson took two right-side Goodyears. When the green flag waved Truex was positioned behind Johnson’s No. 48 car, which stalled on the restart due to a broken shifter. The incident resulted in Truex ramming into the back-end of Johnson’s car, causing severe front-end damage to the Furniture Row/Denver Mattress Toyota. The restart melee collected a total 17 cars.

“I don’t know what we have to do,” said Truex. “We keep putting ourselves in position to win and something way out of the ordinary steps up and bites us. As much as I am disappointed with what happened to us, I am very proud of our pit crew. They did a great job all day and executed the repairs with perfection that gave us an opportunity to finish ninth. It sure didn’t look like we had a shot at a top-10 with the kind of damage we had to the car.”

Truex added, “At the beginning of the race we were a fifth, sixth-place car. But we kept on working on it and there at the end we had the machine to beat. Just one of those deals, wrong place, wrong time.”

Truex gained one spot in the point standings and now stands ninth after the first 12 races.

The next event for Truex is the annual non-points Sprint All Star Race at Charlotte Motor Speedway, Saturday night May 21.