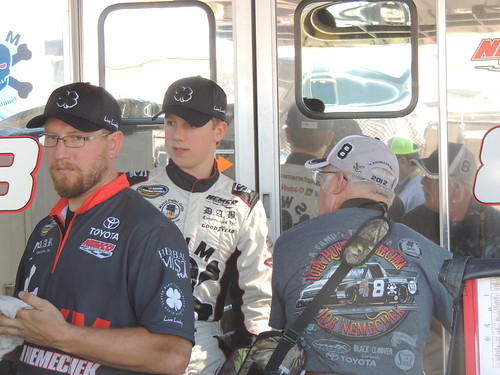 (WOMR file photo)
While there’s nothing concrete is in place, yet, several team owners are taking notice in John Hunter Nemechek — including Richard Childress.

Richard Childress Racing, which is under the same Chevy banner as NEMCO Motorsports and provides engines to the company, has expressed interest in the second-generation racer.

Although RCR suspended its truck operation following the 2014 season, there is ample space in Childress’ Xfinity Series program — and another seat will open next year when Ty Dillon moves into a full-time Cup ride.

“We’ve talked about it,” Childress acknowledged. “We’ve talked about putting him in cars in different places. He’s got a tremendous amount of potential. We’ve got seven cars now, so you’re always looking at drivers and he comes from a great family — a great racing family.”

Nemechek is one of four drivers to win in NASCAR’s Camping World Truck Series this season. His Atlanta victory came eight races after his first career truck win at Chicagoland Speedway in just his second start on an intermediate track. Nemechek, who turns 19 next month, has a career average finish of 10.6 in 34 truck starts.

And since taking over the No. 8 Chevy Silverado full-time after he turned 18 in June, he’s lowered his average to 8.4

Torrey Galida, president of RCR, feels Nemechek would fit nicely into the program.

“I think he’s a real talented young guy and he’s done a great job with a limited budget,” Galida said. “He’d be somebody…it would be great to create an opportunity for him.

“We’ve done their motors for the last couple of years and have great respect for Joe. If there was ever an opportunity, he’s someone we’d look seriously at. Ultimately, that’s Richard’s decision, but he’s a real good kid.”

Certainly, RCR’s future inexorably linked to Chidress’ grandsons — Austin and Ty Dillon. Austin is currently leading the charge in the Sprint Cup Series. The 26-year-old racer won titles in both the truck and Xfinity Series prior to graduating to Cup, where he is currently eight in the standings. Veterans Ryan Newman (17th) and Paul Menard (24th) have flirted with the Chase zone throughout the first 11 races but both have been plagued with bad luck along the way.

Newman, 38, is in the final season of a three-year contract. Galida confirmed Newman’s acknowledgement that his sponsor Caterpillar is “a long-term contract.” Menard, who turns 36 in August and controls his own sponsorship, structures his deal on a year-to-year basis.

Galida told motorsport.com that RCR has “a timeline that we’re working towards,” when it comes to finalizing driver lineups for 2017.

“We’ll start moving on that fairly quickly,” Galida said. “I just can’t discuss the details. Our goal is to put Ty in a fourth car. That’s what we’re working on. We have a good relationship with all of our car partners.”

So it appears that Nemechek may be in line for an RCR XFINITY ride next year!