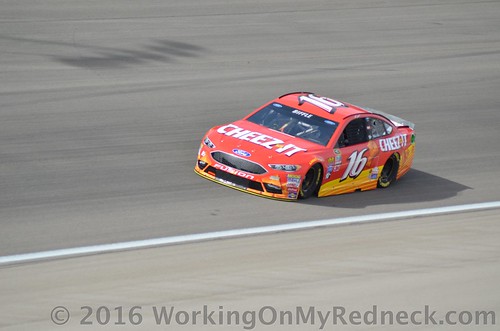 Things happen quickly at Superspeedway racing and in an effort to avoid “the big one”, Greg Biffle spent a majority of the 188-lap race at the back of the field.  The strategy almost paid off but towards the end Biffle’s No. 16 Ford EcoBoost Ford was a magnet for wrecks. After being a part of “the big one” and two other wrecks that followed, the crew was still able to make the necessary repairs to salvage a 20th-place finish Sunday afternoon at Talladega.

With the threat of rain looming, everyone spent the first half of the race trying to make it to halfway.  Halfway came and went and the skies were clear, leading to a full 188-lap race.  Biffle started the race 16th, right in the middle of the pack, and decided to drop to the tail end of the draft to hopefully avoid any wrecks that could occur.

While coming down pit road under caution on lap 52, the No. 11 hit the left rear of Biffle’s No. 16 Ford.  Luckily the damage was minimal and the team could work on it during the stop.  The next 100 laps were smooth sailing for Biffle until “the big one” unfolded on lap 160.  Biffle tried to sneak by on the outside but was pushed up into the wall by another race car.

The team was able to repair the damage and Biffle was even able to crack into the top 10 by making a move on the outside line.  Unfortunately another accident with eight laps remaining caused more damage.  His team made multiple pit stops to repair the body, but Biffle wound up with more damage from the accident coming to the checkered flag.  Biffle was able to drive his No. 16 Ford EcoBoost Ford to a 20th-place finish despite being involved in multiple accidents.

However, I am not sure that The Biff could drive his race onto the race hauler after the checkered flag flew with all the damage that he ultimately incurred throughout the day at Talladega!

Next week is Kansas and that race should be several degrees calmer on the destruction scale!