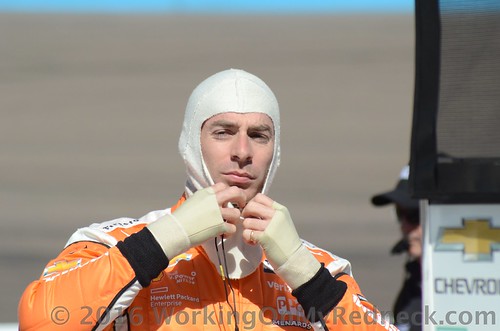 Simon Pagenaud fought off a late attack from Scott Dixon to take his first win as a Penske driver on the streets of Long Beach.

The 0.3 seconds that separated the pair at the finish represented the tightest margin in Long Beach history, but most of the talk after the race centered around the manner in which the Frenchman had taken the lead.

Dixon had spent the afternoon leapfrogging his way up the order during the pit stops, and was provisionally in the lead when he rejoined after his second stop. Pagenaud, who’d fallen behind Dixon during the previous round of stops, stretched his second stint by an extra couple of laps and was rewarded with a view of Dixon in his rear-view mirror when he drove out of the pit exit.

But in his eagerness to stay ahead of the Ganassi driver he crossed the blend line with three wheels, prompting an investigation by race control that eventually amounted to nothing more than a warning.

The lack of a penalty prompted an immediate and unhappy response over the Ganassi radio, and caused confusion elsewhere in light of the series’ pre-season overhaul of race control that included, in part, a pledge to cut down on mid-race warnings in an effort to combat inconsistency. But the wording of IndyCar’s regulations regarding lane usage are one of the few that does allow for a warning as the minimum possible penalty.

“The rules clearly say that if you put two wheels over the line you will get a penalty,” said Dixon. “He got a warning. There’s meant to be no warnings, so I don’t know what that’s all about. That was our race, man. It is what it is.”

Pagenaud insisted that he’d acted within the rules.

After the race, IndyCar issued the following statement on the matter:

“Simon Pagenaud’s actions during the Toyota Grand Prix of Long Beach were deemed an infraction per Rule 7.10.1.1. “Lane Usage” of the INDYCAR Penalty Guidelines: Failing to follow designated procedures entering or exiting the pit area, including the proper use of the acceleration and deceleration lanes. The penalty for this infraction ranges from a warning (minimum), putting the driver to the back of the field (mid) and drive-through or stop and go/hold (maximum). INDYCAR race stewards determined his actions were not severe enough to warrant a harsher penalty than the warning that was issued.”

But, with his first victory as Penske employee in the books, the blend line controversy was of secondary importance to Pagenaud, who credited the victory to a gamble to run lower downforce.

“Holding Dixon [off] is a lot of work,” he said. “I’m so proud of the guys. That pit sequence is what won it. With the package the way it is it’s so hard to pass. The only way to pass is to run less downforce and be faster in the straights. I had to take care of the tires but we managed to do it.” From Dixon’s standpoint, the sting of not seeing Pagenaud penalized was worsened by the fact that had it not been for a miscommunication within the team he might not have been behind the Penske car in the first place.

“What hurt the most was that I thought the pit sequence was over and the team didn’t tell me that there were still more cars coming, so I’d actually gone into fuel save mode and slowed the pace down,” he said. “Had we not done that on those two laps, we would have been clear [of Pagenaud] anyway.”

Close as the leading pair were at the end of the race, they were completely alone!  Third-placed Helio Castroneves was more than 10 seconds in arrears after leading much of the early going, with teammate Juan Pablo Montoya another 1.3 seconds behind Helio. Indeed, during the closing laps, most of Montoya’s attention was focused behind him, where Takuma Sato was seeking to cap off a rousing final stint by picking the Colombian off for fourth. Although he couldn’t make a move stick, fifth place and best of the Hondas was a fair consolation.

Now IndyCar will head to the deep South for the Grand Prix of Alabama next on their schedule.