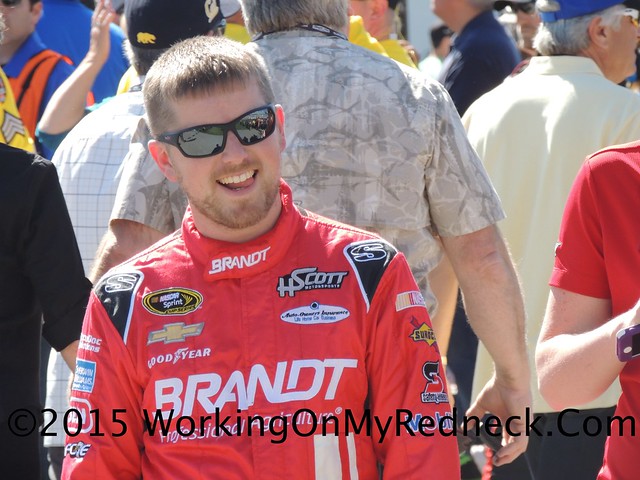 This press release from JR Motorsports has just been made public!

JR Motorsports (JRM) announced today it has entered into a multi-year partnership with BRANDT, a leading agriculture retailer and manufacturer of agricultural specialty products.  Additionally, the team has named Justin Allgaier driver of the No. 7 Chevrolet Camaro, beginning in 2016.

Allgaier will vie full-time for a NASCAR Xfinity Series (NXS) championship with BRANDT Professional Agriculture as a primary partner on the No. 7 in 18 of 33 events.  BRANDT will receive associate placement in the remaining 15 races.  The 2017 races will be announced at a later date.

“JR Motorsports is privileged to bring BRANDT and Justin back into the Xfinity Series,” said Kelley Earnhardt Miller, general manager of JRM. “Much like JRM, BRANDT is also a family business that prides itself on being an industry leader.  We’re excited to give both BRANDT and Justin a renewed avenue for success and look forward to what lies ahead in 2016 and beyond.”

Headquartered in Springfield, Ill., BRANDT has been part of NASCAR since 2011, supporting an “ag car” to build awareness for the men and women of the world’s most vital industry.  Joining BRANDT on the car are the National FFA Organization, Nutrients for Life Foundation, Precision Tank, TradeMark Nitrogen, Grigg Brothers and BRANDT iHammer.

“We set high goals and we aim to lead in everything we do,” said BRANDT President and CEO Rick Brandt.  “We see a partnership with JRM as the next logical step for our brand. The resources JRM provides, both on and off the track, will continue to build our business, engage growers and tell the positive story of agriculture.”

Allgaier has won three times in NXS competition, and two of them came at the wheel of a BRANDT-branded car.  In 174 career NXS starts, he’s scored 29 top-five and 84 top-10 finishes, and was named the series’ rookie of the year in 2009.  Allgaier finished a career-best third in the NXS championship standings in 2011.  Before joining the NXS ranks, he was the 2008 ARCA champion. For the past two years, he has driven in the NASCAR Sprint Cup Series.

“I’m honored and excited to drive for JR Motorsports,” Allgaier said.  “Having the ability to come to the track every week with a car capable of winning races and ultimately run for the Xfinity Series championship is the opportunity of a lifetime.  And to have the support of BRANDT as we move to JR Motorsports means a lot to me, personally and professionally.  It’s now time to get those BRANDT colors back up front and try to bring home a championship that they so very much deserve.”

Outside of BRANDT’s 18 primary races in 2016, the balance of the 33-race NXS schedule on the No. 7 Chevrolet will be filled by existing JRM partners, including TaxSlayer.com, Breyers, Hellmann’s and Suave.  Jason Burdett, current crew chief of the No. 7 team, will serve in the same capacity with Allgaier.  Under Burdett’s guidance the team has earned two wins, 11 top-five and 23 top-10 finishes to date this season.

Allgaier and Elliott Sadler will be JR Motorsports’ two drivers competing for the 2016 NXS championship.  It was announced earlier this month that Sadler will drive JRM’s car that is presently occupied by Chase Elliott.  JRM’s third team, the No. 88 “All-Star” car, will again race full-time with drivers Dale Earnhardt Jr., Chase Elliott, Kevin Harvick and Kasey Kahne next season.  Additional drivers for the No. 88 will be named at a later date.

So now the JRM stable for 2016 has been announced and the speculations are over.