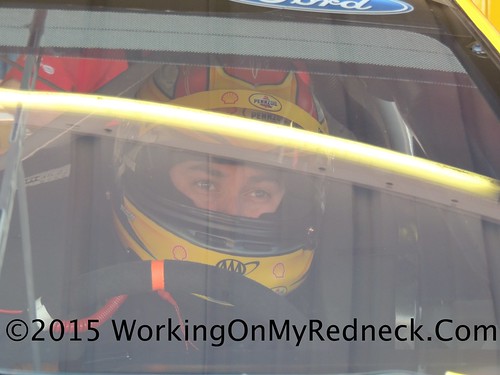 With Kevin Harvick hounding him mercilessly for 63 laps, Joey Logano kept his No. 22 Team Penske Shell Pennzoil Ford out front after taking the lead on a Lap 438 restart and held on to win Saturday’s Irwin Tools Night Race at Bristol Motor Speedway!

It was a fascinating chase over the final 63 laps, as Harvick would bravely drive his No. 4 Stewart-Haas Racing Chevrolet so deep and hard the corner that the turns looked like a diamond at the top of the track.  Harvick would sneak right up to Logano’s bumper in the turns, watch as Logano dived to the bottom on corner exit, and watch as “Sliced Bread” would pull away by two to three car lenghts on the straight-aways!

Successfully defending last year’s victory at Thunder Valley, Logano won his third race of the season, his second at the .533-mile short track, and the 11th of his career.

“There’s not much time to look in the rearview mirror, but I realized how different his line was than mine,” Logano said. “He’d drive in so hard and almost get to my back bumper, and then I’d drive off really good.

“It’s kind of interesting to watch a race like that, when two cars are a similar speed, but in two completely different ways. That’s what’s so fun about Bristol is you can drive the car about five or six different ways and make it fast, so it’s fun to race here.”

“He was just one step ahead of me in traffic,” Harvick said.  “I couldn’t get my car to rotate across the center like I needed it to, and every time I tried to force it, it would snap the back out. He was able to go in really high and before the center of the corner drive down the corner and I was just having to wait just a split second to be able to put the throttle back down, and I couldn’t do that, that huge diamond all the way to the bottom like he could, and that was really beneficial for him through traffic…

“He was able to get those huge runs up off the exit of the corner and just stayed one step ahead of me through traffic, I felt like, and in clean air we probably were a little faster, but it didn’t really matter. I had to be in front of him to show that.”

Previously, Penske was tied for second with Jack Roush. Now, Penske is only four victories shy of tying NASCAR Hall of Fame team owner Junior Johnson for the top spot at the facility.

“There’ a great heritage in Team Penske for this place, beginning with Rusty Wallace,” Team Penske Vice Chairman Walt Czarnecki said. “I think Bristol has always been right at the top of our hierarchy of important races if you look to the schedule.

“To me, personally, winning the Daytona 500 is huge. That’s No. 1, but the Bristol night race is right there with it in my view, and I think the whole organization feels that way. But I really think it began with Rusty and the way that Rusty would focus on this event when he was driving.”

Wallace won nine races at Bristol, seven of them with Penske. Three of those seven victories occurred in the August night race. Those nine victories also locked Wallace in a three-way with Dale Earnhardt and Cale Yarborough for second on the all-time win list.

Logano led four times for 176 laps in gaining his 11th career victory, while Keselowski set the pace on one occasion for four laps. The race’s final 147 laps belonged to Team Penske with Logano leading 143, including the final 64.

However, it was the smoothness with which Logano handled eventual runner-up Kevin Harvick in the closing stages of the race that showed his maturity. Logano methodically sliced his way through heavy lapped traffic in the closing stages like a warm knife through butter, often sweeping down in front of his challenger, narrowly missing the nose of Harvick’s car. Czarnecki said the word he would use to describe Logano in those final 50 laps was “poise.”

And so for those of us watching the Bristol night race, it was quite obvious that, even though it has taken eight years and two race teams to cultivate, the nickname that Mark Martin laid upon an extremely talented, and very young kid, showed through on one hot and steamy night at Bristol Motor Speedway.  At the Irwin Tools Night Race in late August the nickname Sliced Bread was very apropos for one Joey Logano!

Check out the unofficial results from the Irwin Tool Night Race at Bristol.