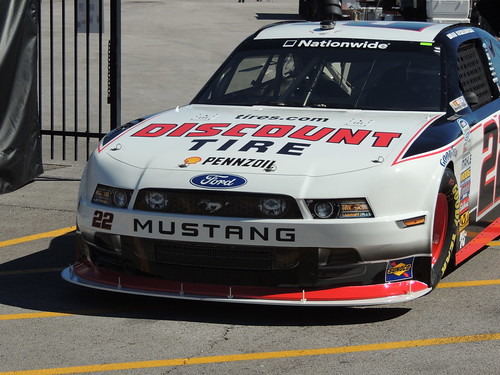 Ryan Blaney capitalized on the final restart in Friday’s rain delayed Food City 300 at Bristol Motor Speedway, but the maneuver that gave him his first Nationwide Series victory this season wasn’t without controversy.

Kyle Busch, who was leading at the time, criticized the way Blaney handled the restart. Blaney said Busch had been going late on the restarts. And third-place finisher Chase Elliott said he didn’t see anything wrong with the restart.

“Kyle made a rare mistake on a restart,” said Elliott, who took a 13-point lead in the standings over JR Motorsports teammate Regan Smith.

“It was just really, really, really hard not to spin your tires here. That’s always been the case here on restarts every time I’ve been here. For whatever reason, it was about 10 times worse tonight than I have ever seen it. If you ever got your tires spinning, you couldn’t ever get it back”, continued Elliott.

The restart issue developed following the 10th, and final, caution period. Busch was the leader, and he elected the outside lane for the restart that occurred with six laps remaining in the 300-lap event. That placed the second-place Blaney on the inside of the front row. Elliott restarted behind Blaney and Regan Smith followed Busch. Busch appeared to be attempting to slow the field when Blaney took off and beat Busch to the start-finish line to lead lap 294.

“The leader is at the biggest disadvantage, I think, because everybody tries to always hold back to the inside,” said Busch, who led twice for 161 laps. “They try to time a run so when the leader goes they have momentum on the leader. I’m trying to maintain a regular speed and those guys are falling back, falling back. Then I try to fall back and then they fall back more. Now you’re underneath the pit road speed. You try to maintain it and then they get a run on your inside.”

“The 22 (Blaney) was 5 mph faster than me by the first double yellow stripe. I didn’t go because I didn’t want to go, but everybody behind me is trying to go because they’re following the 22. I’m trying to wait for him to stop so I can go by the single red mark on the wall. It’s stupid. NASCAR doesn’t police it so everybody keeps jacking around on it. One of these days I’m just going to lock all four down and stack the whole field up”, whined KuBu.

Under NASCAR’s restart rules, the leader controls the start in the restart zone. However, once the green flag waves, the second-place car may beat the leader to the line.

“He likes to go really late,” Blaney said about the way Busch executes his restarts. “I’ve learned that in the Truck stuff and also racing with him in other Nationwide races. He goes really late, so I was kind of prepared for that and my spotter, Joey Meier, did a great job of confirming with me that he was going very late.”

Busch, however, said that his rear tires weren’t on the track as the reason he couldn’t accelerate forward. He also pointed a finger at NASCAR for not policing the restarts properly as the reason Blaney snatched the lead from him.

We all know that every driver who is leading the field to the green flag tries to get any advantage possible.  It is common knowledge that you have to get all that you can get when the green rag waves! For Kyle Busch to whine about gamesmanship at a restart is like the pot calling the kettle black!