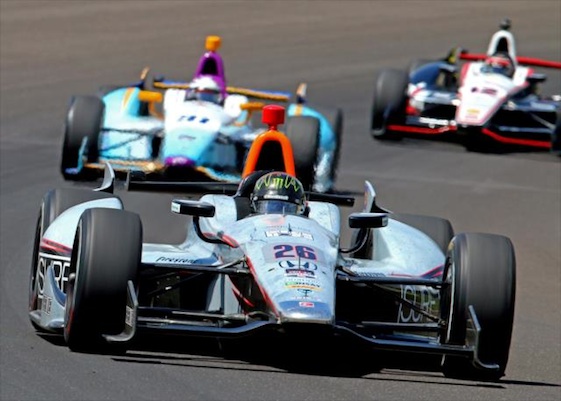 When SHR’s Kurt Busch squeezes into his Indy car on Sunday to compete in the 2014 Indianapolis 500, he will not squeeze in alone  This Sunday there will be 43 drivers and all most the rest of the team members of the garage area that will be squeezing into his Indy cockpit, as well.

That really became evident Thursday when the garages opened for business at Charlotte Motor Speedway as practice got under way for Sunday’s Coca-Cola 600. Driver after driver stood in front of microphones, and notebooks, and talked about the respect they have for Busch – not always the most popular driver in the Cup garages – as he attempts to do the Indy-Charlotte “Double”.

“My take on what Kurt is doing as a race fan is that it’s awesome,” Sprint Cup driver Jamie McMurray said. “I can’t wait to get up Sunday morning, turn the Indy 500 on and watch Kurt’s day. We can all remember Tony (Stewart) and Robby Gordon did it and watching those guys to see how their races goes, them getting on the helicopter – Kurt is actually flying on the plane that I fly on every weekend back down here – and then to show up and race here. I’m excited about it, and I hope other fans – whether you’re and IndyCar fan or a NASCAR fan – are excited to watch his whole day as well. I think it’s really cool what he’s doing.”

In the past, some have criticized those who have done “The Double”. Those naysayers have said it detracts from either the 500 or the 600 or both.  This year, however, in the Charlotte Motor Speedway garages at least, the thought is the tide of positive publicity that Busch is generating will lift a lot of boats!

“It has to bring some interest just from a standpoint that it’s a big challenge from both worlds,” Kevin Harvick, Busch’s teammate at NASCAR’s Stewart-Haas Racing, said. “Whether it’s coming over here and just racing this race or just going over there. I mean they are huge races. I think it’s good for both series that he is doing it bringing a lot of attention both ways.”

Cup driver Dale Earnhardt Jr. said he knows where he will be when the green flag drops at the Indy 500 on Sunday morning.

“I can’t wait to watch and pull for him,” Earnhardt said. “He’s representing the entire sport. Whether he knows it or not, he’s got a lot of people, drivers, crew and just about everyone on the infield pulling for him to do well because he is representing all of us. He’s definitely put in a strong effort to make a different impression. I have to hand it to him. He’s done a lot of work.”

All of the previous drivers who did “The Double” talked afterward about the demands of driving 1,100 miles in one day, and the logistical hurdles that come with racing at tracks located over 500 miles away from each other. Stewart had to be helped from his car in the Charlotte night race.

Busch talked about the physical preparations he has under gone to get ready for his rides.

“Upper body strength is important in both,” Busch, who will be driving an Andretti Autosport car, said. “Core strength is what I have worked on these last six months. It’s to be able to use your core to not over exert your arms or to have your legs cramp up. It’s to be as prepared as you can be for the marathon portion of this. The demands from driving both cars are the same on the body, it’s just I have to be ready to do 1100 miles. Running to the gym, keeping my heart rate elevated while I’m there, doing martial arts type of activity in a boot camp style formula to where as it keeps your heart rate up for that full hour and then run back home from the gym.

“This week it’s been great to add in the full nutrition portion of the program to come in on the first part of the week with low carbs maintaining the protein. It will start tomorrow night with loading up on carbs and almost being at the big fighter weight that you would expect to see a guy with the extra weight just so that I know that I am going to burn all that off on Sunday.”

Harvick said his biggest concern for Busch would be the different styles of driving he will have to employ in two cars that have zero in common other than they use internal combustion engines and role on round wheels.

“I think the biggest challenge and we haven’t specifically talked about it from anything from a race car standpoint is just knowing what car you are in and remembering how to drive that particular car because they are so different,” Harvick said. “I hope he has a good weekend he has done a great job in Indy. I know he has the accident this week, but I think that is not a bad thing either.”

“When I made the mistake on Monday it was because I just started to tell myself ‘Settle in, get into this 500 mile rhythm and know that you have 600 miles later on.’ It was the set-up that I had from the previous Thursday where I was the most comfortable in drafting practice,” Busch said. “I made some adjustments inside the car, didn’t stay on top of Turns 1 and 2. The south end of the track is different than the north end of the track there. The wind angle was at the most different, awkward angle that I’ve had during the whole month of May. Turn 2 bit me. I’m glad that I experienced it. I might sound stupid, by staying that I’m glad I wrecked at 220 mph, but if I didn’t put myself in that position I would have done that on Sunday possibly 50 laps into the race. That is how you have to advance through life is to learn from your mistakes.”

This Sunday there will be no room for Busch to make any mistakes!  From the flying three wide start, to the optical illusion that you get going off into turn #1 flat-footed, to the grueling 500 mile race known as “The Greatest Spectacle In Racing”, KuBu must be on his game with his attention keenly focused on the big prize.

This Sunday, unlike last year when I was sitting in turn #1 at the Indy 500, I will be watching both races, the Indy 500 and the Coca Cola 600 on TV.  However, this year there will be an added twist that makes both races a little more interesting, and that is the real possibility that KuBu has a legitimate chance to win both races!

TIL NEXT TIME, I WILL BE WORKING ON MY REDNECK!