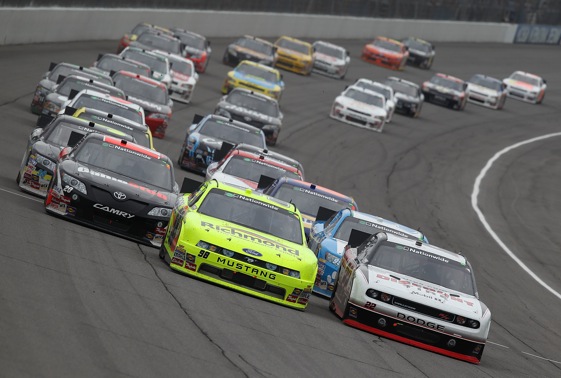 On Friday the Nationwide’s “new cars” will make their third appearance on the NASCAR circuit in the Virginia College Savings Plan 250 at Richmond International Raceway.  On Thurday, these “new cool cars’ got on the track for a six hour practice session.

“It has a lack of grip compared to the old car, but other than that it’s fine,” said Paul Menard, one of 41 drivers who turned laps during the morning session. “Everybody is in the same boat.

“This new car is a cross between the old-style Nationwide car and a Sprint Cup COT.”

Kevin Harvick was complimentary of the added space in the car which benefits drive safety.  “It’s nice to have room inside the car, and that’s the best thing about what we’re doing,” he said. “We can squabble about the way it handles, but it looks cool.

“Everything about this car is cool.”

Because time trials for last month’s Nationwide Series race in Michigan turned into a marathon as teams struggled to get through pre-qualifying technical inspection, a change has been institiuted.  NASCAR is hoping to avoid a repeat at Richmond this weekend.

Therefore, Friday morning’s Nationwide Series practice has been reduced by 50 minutes. And many teams are already working to pick up the pace before they encounter the height sticks in the tech line on Friday.

This new nationwide car, which is also slated to compete at Charlotte next month, is still on schedule to run full-time in 2011 in NASCAR’s junior circuit.

WOMR really likes the new nationwide series car.  It is much more reflective of the showroom floor car that is is portrayed to be!  That is to say, the race car looks more like its badged named car.

What is your view on the “new cool cars”?