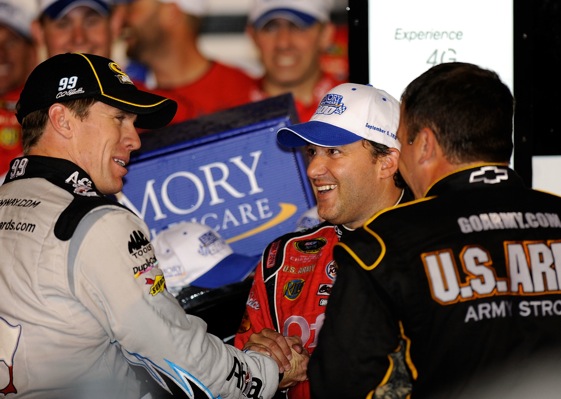 It has readily been apparent that the quality of the racing has had little influence on the decision making process of NASCAR about the calender and schedule in the Sprint Cup era.

Having been to six Atlanta races over the past 20 years, quite predictably, this year’s race  produced a crowd pleasing, earth-shaking, old fashioned scramble, that would even have pleased Glen “Fireball” Roberts!  “Fireball” was the winner of the very first race at Atlanta Motor Speedway back in 1960.  However, the race track that has provided the most side-by-side racing, as well as some of the closest race finishes in NASCAR history is losing one of their two race dates next year.

The blame for the loss of one of Atlanta’s races can be shared.  The race fans haven’t supported the spring race, the weather in Atlanta for the spring race can be very questionable, from cold, to rainy, and it has even snowed at the track on that weekend.  Bruton Smith, the CEO of SMI and owner of the track, elected to move one of the AMS race dates to one of his other tracks, the Kentucky Motor Speedway, a track that he bought at “a fire sale”.  The France family, the owners of NASCAR and ISC, who also owns the nearby race tracks of Daytona and Talladega, refused to consider a schedule change for Atlanta to a part of the year that the fans could bank on decent weather.

The schedule change could have done over a decade ago when there was the first big adjustment to the NASCAR schedule in years.  The spring Atlanta race could have been moved to the Phoenix desert track in exchange for their April date.  This is the same Phoenix track that now has their race date moved up to February starting in 2011!

The reference to “the show” in the title of this article comes directly from “Big” Bill France and Bill France, Jr.  They were always concerned about “the show”.  Both of them wanted to put on the best “show” for the fans.  Well what about these days, is it still all about “the show”?

What is your thoughts on Atlanta?