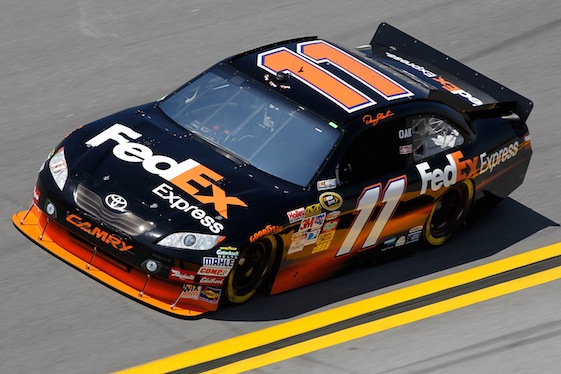 Denny Hamlin won for the fourth time in just nine career races at Pocono Raceway.  The driver of the Joe Gibbs Racing #11 FedEx Toyota Camry dominated the second half of the race after Clint Bowyer dominted the first half of the Gillette Fusion ProGlide 500 this Sunday afternoon.

With 22 laps to go, Hamlin restarted in 9th place and had to slice through eight very strong race cars.  Nevertheless, he did just that and Hamlin took the lead for the final time with just 12 laps to go in the race when he passed Sam Hornish, Jr.  Additionally, Hamlin had to survive one green-white-checkered  restart.  That green-white-checkered was the results of Kevin Harvick getting into the left rear bumper of Joey Logano in the tunnel turn and causing the JGR #20 Home Depot Toyota to spin.  However, Logano was able to keep his race car off of the retaining wall and finish the race.

There was no damage to his car, however, “Logano had blown a head gasket” from his anger!  This was not the first time that Harvick appeared to “dump Logano” during a race.  After the race ended, Logano drove his car up to Harvick’s parked car and appeared to quite possibly discuss Kevin’s heritage, or quite possibly offered a dinner invitation!!

On the last lap of the race there was a huge crash on the Long Pond Straight involving Richard Petty Motorsports team mates Kasey Kahne and A.J. Almendinger.  Kahne had a huge run on “The Dinger” and that group of cars, so he maneuvered his car to the inside to pass the group.  Unfortunately, Dinger  moved further left to block his team mate’s pass, and thereby, putting Kahne into the grass at 190 mph.  As Kahne corrected the car’s path, it shot back up on the track heading directly for the retaining wall, and was T-boned on the passenger side by both Mark Martin and Greg Biffle.  That sent Kahne airborne head-on into the outside retaining wall and collected many of the cars that was behind him.  Some of those cars were Jeff Gordon, Marcos Ambrose,Ryan Newman, and Elliott Sadler to name  a few.

“I don’t know what A.J. was doing there,” Kahne said. “I don’t ever really talk to him much, but you can bet I’ll be talking to him this week.”

Allmendinger took responsibility for the incident.

“I’m not really sure what happened,” Allmendinger said. “Kasey had such a run on me, and I went to defend. By the time I defended, he was in the grass. That’s my bad. I feel bad about that — I really do. It is what it is, though.”

Pocono was a very good race and the dominate car won the race, which as we all know does not always happen.  Even though the Poconos are generally a “honeymoon” destination for East Coasters, for many drivers Pocono was no “honeymoon” Sunday!

P.S. One question for “The Dinger”.  When you go to “defend”, is that the same as blocking?  What exactly is your definition of “defending”?

What is your take on “The Dinger’s” word defend?