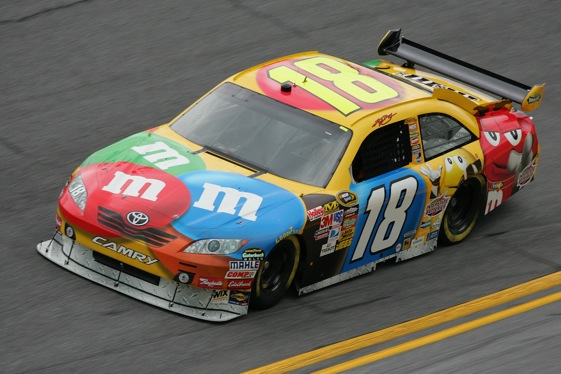 Kyle Busch, driving the JGR #18 M&M’s Toyota, only led 131 laps today, but  he led the most important lap- the last one.  With 38 laps to go, Busch capitalized on a pit road mistake by the HMS #48 Lowe’s Chevy.  Johnson was flagged for speeding leaving the pits and had to return to the pits for a drive through penalty, relegating the #48 team to a 16th place finish Sunday.

The victory was the second for Busch during the Dover weekend,  On Friday afternoon, Busch dominated the Camping World Truck Series race, but ran out of gas on the final restart and failed to bring home the victory for his Kyle Busch Motorsports #18 Toyota Tundra.  On Saturday, however, Busch again thoroughly dominated the Nationwide Series race and was able to bring home a victory for his Nationwide JGR #18 Combos Toyota.

On Sunday, Busch was not the most dominating car, leading only 131 laps.  Jimmie Johnson led a race high of over 200 laps, however, his speeding violation with 38 laps to go was all it took for Busch to “run off and hide” from the rest of the pack.

Points leader Kevin Harvick finished seventh. Busch moved from third to second in points – 69 behind Harvick – with the victory while Johnson fell two places to fourth.

Is the Sprint Cup torch about to be passed from Hendrick Motorsports to Joe Gibbs Racing?  What do you think?