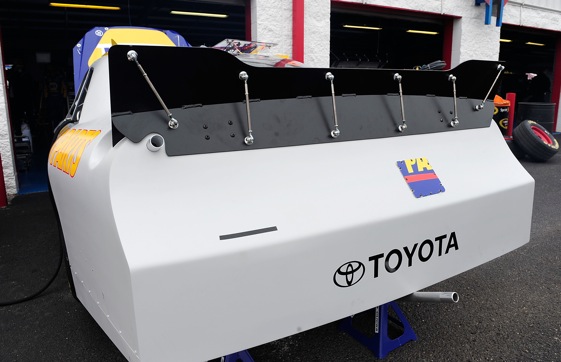 The switch to the spoiler on the Car of Tomorrow (CoT) will now look more like the Car of Yesteryear!  It is also like team owners that change crew chiefs when things are not working out so good for the team.  If it isn’t working, then let’s make a change and try something different!

The rear wing has been a sore subject every since its introduction, by the designer Gary Nelson, on the CoT three years ago.  The wing is a derivative from the wings that are on the Top Fuel dragsters in the NHRA.  Stung by criticism, Nelson was called in by the Bill France, Jr., at that time the chairman of NASCAR, for a discussion.  France, Jr. told him to do what he thought would work, so the wing was put on the race car.

Testing at the Charlotte Motor Speedway this week is likely to help teams learn more about the spoiler than prove that it will make the racing better. If nothing else, a technical change helps the rivals of driver Jimmie Johnson and Hendrick Motorsports believe they might be able to find an edge against the four-time champion due to a change in the technical package.

Now with all the changes to the CoT, the changing of the wing for the spoiler is the easiest and most visible. But will it work?  Will the return of the rear spoiler lead to the same kind of controversy as the “Have at it boys” mentality?

Purely from the safety front, putting the spoiler back on the cars may allow the roof flaps to act more quickly and more efficiently is a strong possibility.  However, since speed is the deciding factor in producing lift, assuming that the speeds stay about the same, one can only hope that re-introducing the spoiler on the rear deck lid will help to destroy lift when the car gets turned around.  Additionally, maintaining the rear fin may be one of the most important developments in “dirtying up” or destroying lift as the air flows over the rear of the roof and rear deck lid in case the car gets turned around.

The one good thing about NASCAR, the sanctioning body is not too proud to change things if it isn’t working out in the present form.

As Bill France, Jr. was quoted in referring to the wing on the CoT during its infancy, “Put the goddamn wing on the car and if it doesn’t work, don’t be too proud to take it off.”