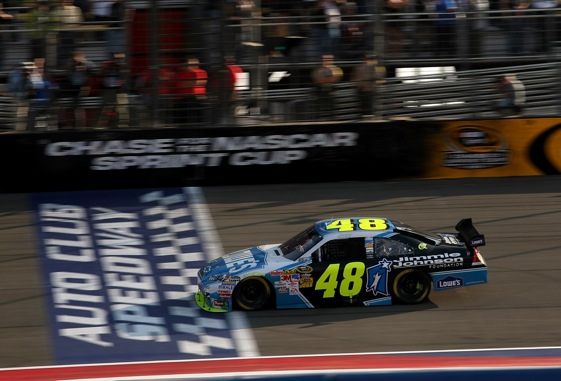 Twelve drivers, ten races, one championship.  That is the cast of characters, the venues, and the grand prize  in what is known as The Chase to the Sprint Cup!

The cast of viable characters has now dwindled, venues have now shrunk to six, but there is still only one champion to be crowned.  NASCAR just finished their pilgrimage to the West Coast with the culmination of the race at Auto Club Speedway( the former California Speedway).  At the end of the race, the cast of characters that have a realistic chance has shrunk to most probably just six.

It is about this time in the Chase for The Cup, at least for the past three years anyway, that the Hendrick Motorsports #48 Lowe’s Chevy revels their “killer instincts” for all to see!  Sunday was witness to this fact!  With Sunday’s victory,the #48 Lowe’s Chevy has now won 2 out the 4 races ran in The Chase in 2009.  They have now won 16 race out of the 54 races in this new format.  Does that make them a dynasty?   Do the math, that is a winning record of 29%, think about it!

My point is that, as much as I have said that the #48 Lowe’s team can’t win four championships in a row, it sure has the familiar smell to it!  ( Oh by the way, does anyone know where I can order up a Crow Dinner?)  The other five teams that still have a legitimate shot at capturing the Championship need to REALLY step up their game, because the three time champion has just “let the dogs out of the yard”!

By virtue of the victory at Auto Club Speedway Sunday,  Jimmie Johnson moved into the points lead over the HMS #5  Kelloggs/Carquest Chevy, driven by Mark Martin, by a mere 18 points.  The Earnhardt-Ganassi Racing #42 Target Chevy, driven by JPM (Juan Pablo Montoya), is still holding onto third place, back 58 points from the leader. Next in the pecking order is the Stewart-Haas Racing #14 Office Depot/Old Spice Chevy, driven by Tony Stewart, currently in fourth place- down 85 points from Johnson.  Meanwhile, the HMS #24 Dupont Chevy of Jeff Gordon is holding down fifth, 105 points behind the leader.  And lastly, the Penske Racing #2 Miller Lite Dodge, driven by the crew chief impaired Kurt Busch, mired down in sixth place back 121 points from the leader.

The positions 7 thru 12 are more than one race worth of points behind the leader and, therefore, virtually they no chance of catching the leader!

In comparison, if Richard Petty would have won 29% of all his 1200+ races he would have won in excess of 348 races!  As it was, the King won a remarkable 200 races, while second place David Pearson has a very distant total of 104!

WELCOME TO THE HOTEL CALIFORNIA!!!

“On a dark desert highway, cool wind in my hair.

Warm smell of colitas rising up thru the air.

Up ahead in the distance, I saw a shimmering light.

My head grew heavy, and my sight grew dim, I had to stop for the night”