Chandler Smith and the No. 18 JBL team head to Bristol Motor Speedway for the final race in the Round of 10 of the NASCAR Camping World Truck Series playoffs sitting 12 points below the cutoff line for advancing to the Round of 8. Smith rebounded from a disappointing 28th-place finish in the opening race of the playoffs at World Wide Technology Raceway at Gateway with a solid day at Darlington (S.C.) Raceway. He was able to score points in each of the opening stages, including a runner-up finish in Stage Two, and ended the day with a seventh-place finish and 42 points scored. Unfortunately for Smith, eight of the nine top point scorers at Darlington were also playoff contenders and he was only able to cut his deficit below the cutoff line from 18 after Gateway to 12 heading to Bristol.

The talented teenager has found success at “The Last Great Colosseum” early on in his Camping World Truck Series career. As a 17-year-old, making just his third-career Truck Series start in 2019, Smith challenged for the win before finishing second to eventual series champion Brett Moffitt. Last year, Smith went a lap down early in the race, but was able to recover and earn a fifth-place finish. He also has one ARCA Menards Series start at Bristol but was relegated to a 23rd-place finish after experiencing a mechanical.

Smith finished the regular season 10th on the Camping World Truck Series playoff grid, 10 points above the cutoff line for qualifying for the post season, after posting three top-five and five top-10 finishes across 15 races. Smith and fellow Sunoco Rookie of the Year contender Carson Hocevar are the only two drivers who are competing for a driver’s championship for the first time. The other eight contenders have all competed for the Truck Series championship at least one time in previous seasons.

Smith picked up a victory in the CARS Super Late Model Tour event at Tri-County Motor Speedway in Granite Falls, N.C., on Saturday, Sept. 11. It was his second Super Late Model victory of the year driving for Donnie Wilson Motorsports. He also was victorious at 5 Flags Speedway in Pensacola, Fla. on July 24.

The Toyota Racing Development driver has 11 top-five, and 15 top-10 finishes resulting in an average finish of 15.4 across 33 career Camping World Truck Series starts. His runner-up finish at Knoxville Raceway earlier this season equaled the career-best finish he achieved at Bristol in 2019.

Veteran crew chief Danny Stockman calls the shots for Smith and the No. 18 team this season. Stockman led the No. 51 team to four wins in his first season atop the pit box at KBM in 2020. He came to the organization with experience as a crew chief in all three national series, including a Truck Series championship with Austin Dillon in 2011 and an Xfinity Series championship with Dillon in 2013. Stockman’s Truck Series drivers have three starts at Darlington, with Smith’s fifth-place finish last year being the best result. In Xfinity Series action, his best result across 13 starts is a pair of third-place finishes, first with Dillon in 2013 and again with Daniel Hemric in 2018.

Safelite AutoGlass – the nation’s largest provider of vehicle glass repair, replacement, and recalibration services – will serve as the primary sponsor on Smith’s Tundra at Bristol and for 16 races total this season. Smith General Contracting and, QuickTie – a proprietary, patented hold down system for high wind and seismic construction- will be associate partners on the bedtop of the No. 18 Toyota for Thursday’s 200-lap event.

Do you enjoy racing at Bristol?

“It’s a short track that has a lot of banking and it has my name written all over it! I love Bristol. Growing up as a kid I always dreamed of racing there and the first time I ever got to race there with KBM was amazing, especially being in the Camping World Truck Series. Overall, I’m really excited about going there and I think our luck will hopefully turn around and we’ll bring the Safelite Tundra home in one piece.”

With being 12 points below the cutoff line for advancing to the Round of 8, how will you approach Thursday’s race?

“The biggest thing for us is surviving and honestly trying to win the race. That’s all we can really do is run our own race and if we are really good, we should be able to win the race and if not maximize all of our points and do the best we can. If we come up a little short, it is what it is, and we’ll know that we gave it our best. You can only control the things that you can control, you can control others. Hopefully we can just go out there and get the win though. That’s what we are looking forward to.”

You’ve been running more Super Late Model races lately and have won a couple of them. Does that help you when you get in a truck?

“I think it’s confidence honestly. At the start of the year, we were okay in the trucks, and it steadily started going downhill, downhill, downhill. I wasn’t doing much Super Late Model racing at that time, so my confidence as a driver may have been a little bit down just because you hear things, hear people start saying stuff and you kind of start second guessing yourself and your ability to drive. Being able to hop in a Super Late Model and be really strong every weekend I hop in one and picking up a few wins this year definitely boosted my confidence back up. So, it definitely helps me as far as my confidence.”

Posted an average finish of 7.7 across his final seven of 12 total Truck Series starts in 2020, including third-place finishes in the series finale at Phoenix (Ariz.) Raceway and his first career superspeedway start at Talladega (Ala.) Superspeedway in October.

Produced three top-five and four top-10 finishes resulting in an average finish of 4.2 across his first four career NASCAR Camping World Truck Series starts in 2019. He led 55 laps and finished eighth in his Gander Trucks debut at Iowa Speedway last July and then posted top-five finishes in his final three starts, including a runner-up finish at Bristol (Tenn.) Motor Speedway.

KBM-52: The No. 18 Safelite AutoGlass team will unload KBM-52 for Thursday night’s race at Bristol. It is the first time that this chassis has raced this season. Smith drove this Tundra to a fifth-place finish at Bristol last September. KBM-52’s best career finish of second came with KBM owner-driver Kyle Busch in its debut race at Kansas Speedway in Kansas City in May of 2020.

Owner-driver Kyle Busch has collected all three of his organization’s victories at the half-mile oval, winning the Camping World Truck Series race as a part of his historic Bristol Sweeps in 2010 and 2017 and he also won the 2013 event.

KBM holds the Camping World Truck Series records for most career wins (88) and most wins in a single season (14 in 2014). With his victory at the Bristol Motor Speedway Dirt Track, Truex Jr. became the 16th different driver to win a Truck Series event for KBM. In addition to collecting a series-record seven Owner’s Championships, the organization has produced two championship-winning drivers: Erik Jones (2015) and Christopher Bell (2017).

The No. 18, the number which was on the first Tundra that went to victory lane for KBM in 2010, has 21 career victories. 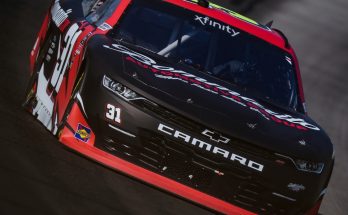