Tyler Reddick and the No. 8 iCashautos / I Am Second Chevrolet Camaro ZL1 1LE at Texas Motor Speedway… Tyler Reddick is looking to make his debut appearance in the NASCAR All-Star Race this weekend, having finished 10th in the All-Star Open last year at Bristol Motor Speedway. Reddick has two NASCAR Cup Series starts at Texas Motor Speedway, including a Cup Series career-best finish of second (July 2020). He also has five NASCAR Xfinity Series starts at the 1.5-mile speedway, with his best finish of second coming in both October 2018 and March 2019. The driver also has six starts, one pole award and four top-five finishes at the 1.5-mile speedway in the NASCAR Truck Series.

Vote for Tyler… It’s not too late to vote Reddick into the All-Star race as the 2021 Fan Vote! Fans can vote on NASCAR.com/FanVote once a day through Friday, June 11, at 12 p.m. ET for Reddick as their pick for the All-Star race.

Welcome iCashautos.com… The concept for iCashautos formed from a 40+ year friendship between Tim Faith (Owner/operator of multiple new vehicle franchises for over 20 years) and Dale Cardwell (Investigative/consumer reporter for 30+ years and owner of TrustDale.com). The two lifelong friends have created a process where iCashautos gives customers a direct and FREE path to some of the nation’s Best-Automotive dealers, providing those customers with an excellent purchase experience. Allow those dealers to be part of the iCashautos marketing family, which is far less expensive than traditional advertising and marketing for auto dealers. Allowing iCashautos to share the savings with their customers. “Better-Than the Best Price™” ALWAYS saves you money. iCashautos allows you to purchase from one of our approved dealers and save, or use any other online service and simply take their so called lowest or best price to your iCashautos dealer. If the iCashautos dealer can beat or at least match their best price, you get a check from iCashautos, it’s that simple. At iCashautos you get a great buying experience and always: “Better – Than the Best Price”™

About I Am Second… I Am Second is a non-profit that ignites hope and inspires people to live for something greater than themselves. Launched in 2008, the iamsecond.com website features more than 100 powerful short films of athletes, actors, models, musicians, cultural influencers and everyday people who have found hope through a relationship with Jesus. Watch their stories and find out more at iamsecond.com.

TYLER REDDICK QUOTE:
What are your thoughts on Texas Motor Speedway hosting the All-Star race for the first time this weekend?
“I hope it’s a good race at Texas Motor Speedway this weekend, with them hosting the All-Star Race event for the first time. I’ve come close to winning at Texas Motor Speedway a lot in my career, even finishing second behind my teammate Austin Dillon last July, so I’m excited at having another shot there. Getting into the All-Star Race either by racing my way in or with the Fan vote is the first goal, and then from there I know my iCashautos / I Am Second team will do everything we can to win the million-dollar prize. It’s going to be tough though, especially with the horsepower change. It’s already hard to pass in these Cup cars, and this creates another challenge for us. Everyone has learned how to work the air with this package, so you’re going to have to be really smart on how to get up front. It’s a little bit of an unknown going into the weekend with the change in horsepower, but I know my team and I will make the most of it and try to put on a good show for the fans.”

Battle in the Lone Star State… For the first time in history, the Cup Series stars will battle for one million dollars deep in the heart of the Lone Star State at Texas Motor Speedway. With his win at the Fort Worth track last season, Austin Dillon is locked into the All-Star Race. Tyler Reddick will need to race his way in by winning a stage in the All-Star Open in order to secure a spot in the feature event.

Catch the Action… The NASCAR Xfinity Series’ Alsco Uniforms 250 Powered by Cheddar’s Scratch Kitchen at Texas Motor Speedway will be televised live Saturday, June 12, beginning at 4 p.m. ET on FS1 and will be broadcast live on the Performance Racing Network and SiriusXM NASCAR Radio Channel 90.

The NASCAR Cup Series’ All-Star Open at Texas Motor Speedway will be televised live Sunday, June 13, beginning at 6 p.m. ET on FS1 and will be broadcast live on the Motor Racing Network and SiriusXM NASCAR Radio Channel 90.

The NASCAR Cup Series’ All-Star Race at Texas Motor Speedway will be televised live Sunday, June 13, beginning at 8 p.m. ET on FS1 and will be broadcast live on the Motor Racing Network and SiriusXM NASCAR Radio Channel 90. 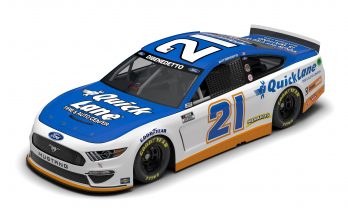 DiBenedetto Looking For A Repeat