LOCKED IT IN: Sunday will mark William Byron’s third start in the NASCAR All-Star Race, but this year Byron already is locked into the event due to his wins at Daytona International Speedway last August and at Homestead-Miami Speedway in February. However, needing to race his way into the All-Star Race in the past, Byron has gotten the job done in the Open qualifier race the last two years. In 2019, he won the opening stage of the qualifier at Charlotte Motor Speedway, automatically locking himself into the main event where he finished ninth. In 2020, the Charlotte, North Carolina, native captured the win in the second stage of the Open race at Bristol Motor Speedway, advancing himself to the All-Star Race where he raced to a 12th-place result.

TRUCKIN’ IT IN TEXAS: Byron’s success at Texas Motor Speedway started almost five years ago in his first start at the 1.5-mile oval with crew chief Rudy Fugle on the pit box. Starting from the sixth position, the then-NASCAR Camping World Truck Series rookie led six laps before capturing the checkered flag becoming the youngest to ever win a Truck Series race at Texas.

TEXAS TOUGH: Texas Motor Speedway is a track where Byron has always run well throughout his entire NASCAR career, even if that isn’t always reflected in the statistics. In six Cup Series starts at the Lone Star State track, Byron has two top-10 results, including a track-best finish of sixth in March 2019. Byron also has four other starts at the 1.5-mile oval, with an average finish of 3.5 in two Truck Series starts and an 8.0 average finish in two NASCAR Xfinity Series races.

FUGLE HAS ‘NO LIMITS’: While Sunday will mark crew chief Fugle’s first NASCAR All-Star Race, the Livonia, New York, native is no stranger to success at Texas Motor Speedway. With 15 starts at the 1.5-mile oval, all coming in the NASCAR Camping World Truck Series, Fugle has visited victory lane at the “No Limits” track five times – the most for him at any venue on the circuit. He celebrated a win there most recently in 2019 when he swept both Texas races, first with Kyle Busch in March and then in June with Greg Biffle. Of those five wins, one is with Byron in June 2016. In his 15 previous starts, Fugle’s drivers have also racked up seven top-five finishes and 11 top-10s with 493 laps led.

ALL ABOUT AXALTA: With the NASCAR All-Star Race moving to Texas this year, Byron will climb behind the wheel of the No. 24 Axalta Chevrolet Camaro ZL1 1LE for the exhibition event. Now in its 29th year of partnership with Hendrick Motorsports, Axalta will return as primary partner on Byron’s No. 24 for 14 races in 2021.

FOUR STARS: On Sunday, Hendrick Motorsports will have all four of its Chevrolets appear in the NASCAR All-Star Race for the 20th time. Including 2021, the team has put four cars into the field in 18 of the last 20 years and has placed at least three in the All-Star Race for a record 22 consecutive seasons.

CARRYING MOMENTUM: Hendrick Motorsports is on a roll heading into the all-star break. The organization has won four consecutive points-paying NASCAR Cup Series races, sweeping at least the top-two positions in each, leading 842 of 946 laps (89%) and recording an average result of 5.7. Its finishes include 1-2-3-4 at Dover, 1-2-8 at Circuit of The Americas, 1-2-4-5 at Charlotte Motor Speedway and 1-2-9 at Sonoma Raceway. At NASCAR’s top level, no team has ever finished in both the first and second positions in five consecutive points races.

TMS EXPRESS: Although Texas Motor Speedway will host its first NASCAR All-Star Race this Sunday, Hendrick Motorsports has plenty of history at the venue. With nine points-paying wins, the team is tied with Joe Gibbs Racing and Roush Fenway Racing for the track record.

William Byron, driver of the No. 24 Chevrolet Camaro ZL1 1LE, on what he thinks the biggest challenge will be at the NASCAR All-Star Race: “I think the biggest thing is that you’re going to have the low horsepower, even lower than the horsepower we have currently. It’s going to put us closer together, more nose-to-tail, and probably will be drafting constantly. That’s going to make it tough. You’re going to have to have a good handling car to try drive away from people, but I feel like it’s still going to be hard to really ever get away. We’re focusing on getting the handling right, and I think we’re in the ballpark. We’ll just have to see what happens.”

Byron on the All-Star Race format: “With short segments and low downforce, there’s a good chance you’re going to see constant action. There’s no time to just ride around or save your stuff. It’s going to be about getting up on the wheel and the strategy you use. I don’t know what to tell you about that last segment other than to expect insanity. It’s going to be a lot of aggressive moves and racing in those final laps. I’m excited for it. It’s an All-Star Race, so it’s going to take everything you’ve got.”

Rudy Fugle, crew chief of the No. 24 Chevrolet Camaro ZL1 1LE, on his prediction for the All-Star Race: “There’s a lot of unknowns for Sunday’s All-Star Race. I think gaining track position and maintaining it is going to be the biggest key to having a good run and being in contention for the win during that last stage. With the aero package and horsepower we’re running, it may be easy to pull up on someone, but passing them is going to be a different challenge. It helps that we’re already locked into the race though so we can watch the Open and get a general idea of how this package is going to run at Texas seeing as right now it’s all speculation. While there is some strategy involved for this event, you can only guess what the inverts may be. To me, the biggest thing strategy-wise is determining when to use your tires and when to save them. With five stage breaks but only four sets of tires and a mandatory four tire-pit stop during stage five, you have to decide when you’re taking tires and when you’re staying out. We’ll have a general plan going in, but scenarios change so quickly that you have to be ready for anything.” 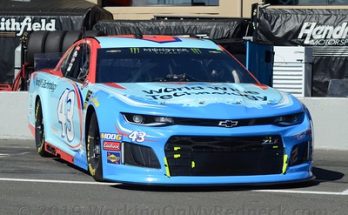 Erik Jones Had A Rough Day At Kansas 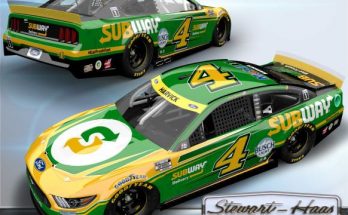 Harvick Bags A Third At Kansas