Back To Familiar Territory: In his sophomore season of Truck Series competition, Fogleman returns to Richmond (Va.) Raceway looking to improve on his track-best 15th place run at the 0.875-mile short track in September 2020.

After Mother Nature canceled the heat races, Fogleman started the race mid-pack in 24th but kept his nose clean throughout the 150-lap race to finish 23rd and score his third top-25 finish of the 2021 NASCAR Camping World Truck Series season.

To The Point(s): Entering Richmond, Fogleman sits 23rd in the championship standings.

Just 28 points separate Fogleman from 15th in the championship standings currently held by Chandler Smith with 17 races remaining this season.

Did You Know?: 21-year-old Fogleman is the son of Jay Fogleman a former competitor in the NASCAR Xfinity Series and a 10-time winner in what is now known as the CARS Tour Series.

He is also a business major at High Point University.

A Look Back At 2020: Even with a worldwide pandemic, Fogleman completed a full 23-race schedule in 2020 earning a best finish of 13th at Michigan International Speedway in August, while also tallying three top-15 and 11 top-20 finishes throughout the seven-month season.

He will crew chief his 30th NASCAR Camping World Truck Series race on Saturday. In his previous 29 races, he has one top-five and two top-10 finishes to his resume.

This weekend will mark his first race at Richmond as crew chief.

On Richmond Raceway: “Richmond is a race we had circled on our calendars early in the season because of the strong performance we were able to produce last fall. I enjoy short-track racing and despite my lack of experience at Richmond, we were able to capitalize on a fast truck and earn one of our best finishes of the season.

“Our goal is to return to the Richmond and duplicate and better our finish from last year for our No. 12 Solid Rock Carries Chevrolet team.”

On 2021 Season After Five Races: “Obviously, we started off the year solid, but haven’t built the consistency I was hoping to early in the season. We won’t give up though. The Truck Series is very tough this year, but our Young’s Motorsports team is resilient and we’ll find our groove and start delivering the finishes I know we are capable of producing.” 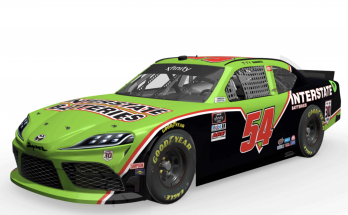