Kyle Larson scored the victory in the first Lucas Oil Late Model Dirt Series event of the season on Saturday night at All-Tech Raceway. The 28-year-old California native earned his second career win in a dirt late model. On his way to Lucas Oil Victory Lane he took the lead from Tyler Erb on lap 14 and proceeded to lap up to the eighth-place finisher, eventually winning the race by a stout 15 seconds.

There was a tight battle for the lead for the first 14 laps as Larson, Erb, and Devin Moran battled for the lead. Larson started sixth and passed Erb for the point, completely dominating the rest of the 50-lap race which went caution free. Moran moved into second on lap 16 and stayed there the rest of the race. New track record holder Mike Marlar came home in third followed by reigning Series Champion Jimmy Owens, and Brandon Sheppard.

Erb started from the pole and looked strong early on, but he couldn’t hold off the hard-charging Larson who skated past Erb and pulled away from the entire field. Marlar got around Erb late in the race as Erb lost three spots in the closing laps to finish sixth. Owens came from the 13th starting spot to salvage a good finish taking fourth, after a good battle with Sheppard.

In Lucas Oil Victory Lane Larson was in amazement of his performance. “I have been asking a lot of people how to run the bottom. I have been really bad every time in a late model about moving around. I can run the top good but moving around I haven’t been very good. So, I just tried to be a lot smoother. Gosh, my race car was so fast. I could go anywhere I wanted.”

Larson, who in 2020 captured 46 feature events and was the open wheel driver of the year, praised his car owner Kevin Rumley for the win. “Kevin Rumley and everyone who works on this thing, it’s such a pleasure to drive. I cannot believe I won Port Royal last year, and I can’t believe I won here. This is awesome. Thanks to all of the fans in the stands and the ones watching at home.”

Moran was pleased with his second place run in the Tye Twarog-owned entry. It was Moran’s first race since last October after having off-season wrist surgery. “I lost all of my tearoffs early in the race. I couldn’t see the 6 car anyways, he was too far out in front. We will take this top two finish heading to East Bay next week.”

Marlar, who is attempting his first full season with the series was pleased with his opening night performance. “As the track moved around a little bit, I got better. I want to thank Ronnie Delk for giving me this opportunity, my wife Stacy, and my crew for giving me such a good car tonight. Thank you to all of my sponsors and to the fans for everything that you all do for us.” 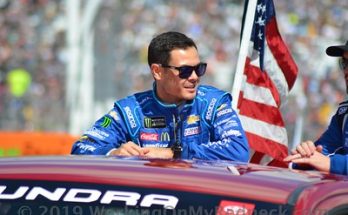