Bell at Martinsville: Christopher Bell heads to Martinsville Speedway to make his second NASCAR Cup Series (NCS) start at the 0.526-mile track Sunday. Bell made his first NCS Martinsville start under the lights earlier this year and crossed the finish line 28th.

History at Martinsville: Bell has four prior starts in the NASCAR Gander Outdoor Truck Series (NGOTS) at Martinsville, earning two top-five and three top-10 finishes. Bell has led 112 laps at Martinsville and has never finished lower than 19th.

Texas Recap: Christopher Bell’s No. 95 had a special paint scheme at Leavine Family Racing’s (LFR) home track of Texas Motor Speedway. The design on the car was the same as LFR originally ran on the No. 95 in 2011 in their first ever NCS start. Bell started 15th and had a fast Toyota Camry. In the final stage Bell was running third and on the heels of the leaders, ultimately earning a third-place finish, his best career NCS finish to date.

Christopher Bell: “Martinsville is a super tough track and we had a tough go at it in the summer. Hopefully with some notes we can improve and be better than last time.” 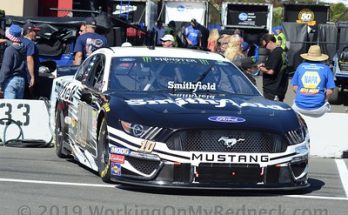