One of the most thrilling seasons in NASCAR Xfinity Series history officially begins its Playoff push in Saturday’s Alsco 300 at Las Vegas Motor Speedway (7:30 p.m. ET on NBCSN, PRN and SiriusXM NASCAR Radio) with a field of 12 title-eligible drivers all looking to hoist the Xfinity championship trophy for the first time.

And despite the fact that Chase Briscoe (seven wins) and Austin Cindric (five wins) have combined for 12 wins – nearly half the 26-race total to date – these two competitors still insist the 2020 championship feels completely up-for-grabs.

The only fulltime Ford drivers, Briscoe and Cindric start the Playoff run tied in points. Cindric won the regular season title and 15-point bonus for doing so. Briscoe equals him in the standings thanks to the two extra race wins. And one of those wins includes a 2.8-second victory over Cindric at Las Vegas in March before the sport shuttered for COVID-19 precautions.

Briscoe led a race best 89 of the 200 laps. Cindric led 39 laps and Justin Allgaier, who is third in the championship – only 17 points behind the points-leading pair, led 63 laps in March. These three championship frontrunners led all but nine laps in that race and that’s a strong statement as cars grid on Saturday.

“I would love to say ‘yes,’ but I don’t know if you can really pick a favorite right now,” said Briscoe, driver of the No. 98 Stewart-Haas Racing Ford. “I think this year has been so, everybody hits their moment and at different times. It’s been really streaky.

“You look at us, we won five out of the first 12 and then Cindric won five out of six. Allgaier wins three, so I feel confident that we can make it to the final four, but I don’t know if there’s really one guy that sticks out over any of the others.

“I feel like anybody on any given day can be the guy to beat and this series has really been competitive all year long, so I would love to say, ‘Yeah, you’ve got to beat us to win the championship,’ but truthfully there are a lot of really good race car drivers, a lot of really good race teams in this series and it’s gonna be hard to beat any of them on any given day, so you just have to hit it right that day.”

During Playoff media availabilities this week, driver after driver spoke about the importance of doing well at the 1.5-mile Las Vegas track considering the next two stops in this opening round are on the Talladega (Ala.) Superspeedway high banks and the Charlotte Motor Speedway Road Course – a couple venues considered “wild cards” by most standards.

“I feel like we have some really good momentum heading into the Playoffs and I’m glad we’re kicking things off at Vegas,” said Allgaier, driver of the No. 7 JR Motorsports Chevrolet, who has won two of the last three races entering the Playoff stretch.

The remainder of the Playoff field following this talented trio, includes Allgaier’s JR Motorsports teammate Noah Gragson, a two-race winner, Joe Gibbs Racing’s Brandon Jones, who has three trophies and Justin Haley and rookie Harrison Burton, who each have two wins. All the series winners have won multiple times.

Next up is Ross Chastain, who has five runner-up finishes including three in the last six weeks in the No. 10 Kaulig Racing Chevrolet. In addition to challenging for the Xfinity Series championship now, Chastain announced this week that he will move into the NASCAR Cup Series ranks fulltime next year in one of the most high-profile rides on the circuit, the Chip Ganassi Racing No. 42 Chevrolet.

He finished 10th at Las Vegas in March but is very fond of this venue considering he scored a very dramatic, dominating first-ever major win in this race in 2018 driving a Ganassi Xfinity Series car.

Ryan Sieg, who drives his family-owned No. 39 Chevrolet, heads to the Playoff as a career best ninth-place seed, followed by JR Motorsports veteran Michael Annett, a third Joe Gibbs Racing driver, rookie – and Las Vegas native – Riley Herbst and another independent Brandon Brown, who is making his Playoff debut in the No. 68 family-owned Brandonbilt Motorsports Chevrolet.

As Chastain so succinctly put it, “I can’t wait to get out there (Las Vegas).” 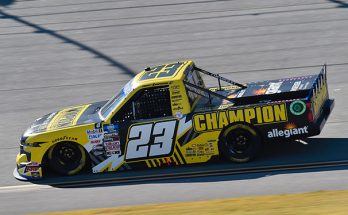