• The NASCAR Xfinity Series rolls into the hills of eastern Tennessee this Friday night to race under the lights at Bristol Motor Speedway. Chase Briscoe comes into the half-mile, high-banked oval looking to finally stand atop ol’ Rocky Top after back-to-back second-place finishes in his last two starts at the track. A victory in the Food City 300 would give the 25-year-old racer from Mitchell, Indiana, seven wins this season and put him in prime position for the NASCAR Playoffs, which begins Sept. 26 at Las Vegas Motor Speedway – the site of Briscoe’s first victory of 2020.

• In a season where Briscoe has scored a series-best six wins, earned 13 top-five and 17 top-10 finishes and led 527 laps, expectations are justifiably high for the driver of the No. 98 Ford Performance Racing School Mustang. So after three straight finishes outside the top-10, Briscoe and his Stewart-Haas Racing team are looking to bounce back and return to the kind of front-running consistency that has them locked into the playoffs and second in the championship standings.

• Briscoe’s most recent victory came Aug. 23 at Dover (Del.) International Speedway, a track that shares two main characteristics with Bristol – a concrete surface and high banking. Dover’s corners are banked at 24 degrees and Bristol features progressive banking beginning with 24 degrees at the bottom and 28 degrees at the top. Dover, however, is a 1-mile oval while Bristol is a .533-mile oval.

• Briscoe has made five career Xfinity Series starts at Bristol and has finished fourth or better in his last three starts at the track – all of which have come with Stewart-Haas Racing. Briscoe’s best finish is second, earned twice (August 2019 and June 2020).

• In addition to his Xfinity Series experience at Bristol, Briscoe has one NASCAR Truck Series start at the half-mile bullring. In 2017, Briscoe started 15th and finished 12th in the UNOH 200.

• While fellow Ford driver Austin Cindric clinched the regular-season championship last Saturday at Richmond (Va.) Raceway, Briscoe is second in the standings, four points ahead of third-place Ross Chastain. However, Briscoe is tied with Cindric in playoff points with 35. Briscoe finished fifth in the title race last year, narrowly missing out on advancing to the Championship 4 and competing for the series title. Nonetheless, the performance earned Briscoe the 2019 rookie-of-the-year award.

Is Bristol the place for you and the No. 98 team to get back on track before the playoffs begin?

“We’ve raced at some tracks where I’m not as comfortable and familiar with what I need to be fast and run well, but that’s not the case with Bristol. We’ve run really well there in the past and I feel like this is where we can turn things around. The biggest thing is being ready for anything. Things happen so quickly and you can get caught up in a mess that could end your day. If we can avoid that, we’ll be in a good position to take the Ford Performance Racing School Mustang back to victory lane.”

You’re already locked into the playoffs, so what is the goal for this race?

“The goal is always to win. Those playoff points are a big deal. We’ve got a good amount of them, but if we can come out of Bristol with a few more, that would certainly help down the line – especially with a first round that includes Talladega and the Roval.” 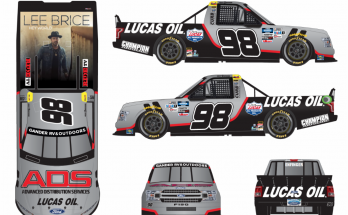 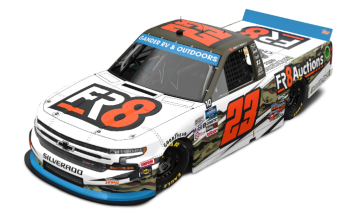 Fr8Auction Partners With Moffitt At Talladega