● The No. 14 Ford Performance Racing School Mustang moved to eighth before the lap-30 competition caution.

● Bowyer drove by William Byron for seventh on lap 62, but fell back to 10th on the final laps of the stage.

● Bowyer told the crew he was “dead in the water” on the final laps of the stage.

● During the stage break, Bowyer pitted for four tires and more handling adjustments.

● The No. 14 Ford Performance Racing School Mustang made a routine green-flag stop on lap 154.

● The No. 14 faded to 15th in the final laps, but fought hard to stay on the lead lap just ahead of the leader.

● Bowyer told his crew if he could “turn a little better” he would be good.

● Bowyer turned some of his best laps of the race in the closing stint.

● Bowyer earned his ninth top-10 of the season and his 17th top-10 in 29 career NASCAR Cup Series starts at Richmond.

● This was Bowyer’s fifth straight top-10 at Richmond. He finished eighth in the series’ previous race at Richmond last September.

● This was Bowyer’s second straight top-10. He finished 10th in the series’ last race at Darlington.

● Brad Keselowski won the Federated Auto Parts 400 to score his 34th career NASCAR Cup Series victory, his fourth of the season and his second at Richmond. His margin of victory over second-place Martin Truex Jr., was 1.568 seconds.

● This was Ford’s series-leading 16th NASCAR Cup Series win of the season and its 702nd all-time Cup Series victory.

● This was Ford’s 33rd NASCAR Cup Series victory at Richmond. Ford’s previous win at the track came with Joey Logano in April 2017. Its first Richmond win came on May 5, 1957 with Paul Goldsmith.

● There were three caution periods for a total of 21 laps.

● Kevin Harvick remains the championship leader after Richmond with a 21-point advantage over second-place Denny Hamlin.

Playoff Standings (with one race to go before Round of 12):

“Man, I thought we would be a click better than that tonight. It was a battle. We made a lot of changes and kept working on it. We are three points up going to Bristol. We need to go there and perform. We can do it. That’s going to be a heck of a show Saturday night.”

The next event on the NASCAR Cup Series schedule is the Bass Pro Shops NRA Night Race on Saturday, Sept. 19 at Bristol (Tenn.) Motor Speedway. It is the third race of the 10-race playoffs and the last race in the Round of 16. It starts at 7:30 p.m. EDT with live coverage provided by NBCSN and SiriusXM NASCAR Radio. 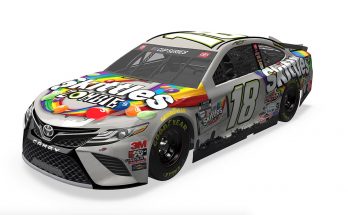 KyBu Hopes To Be A Spoiler At Texas