Brad Keselowski made good on a confident Babe Ruth-like prediction earlier this week when he said he expected to dominate and win Saturday night’s Federated Auto Parts 400 Playoff race at Richmond (Va.) Raceway.

Dominate, he did. After leading a race best 192 of the 400 laps at the three-quarter mile track, Keselowski scored an impressive 2.568-second victory over Martin Truex Jr. to guarantee his position in the next round of the NASCAR Cup Series Playoffs. It’s Keselowski’s fourth win of the season in the No. 2 Team Penske Ford and 34th career victory.

Denny Hamlin, who finished 12th, still earned enough points to secure a spot in the next round of the Playoffs. He led 45 laps and won Stage 1, but he was called for speeding on pit road and had to play catch up the rest of the night after serving the penalty.

The only caution flags Saturday were for scheduled slowdowns – a competition caution and two stage breaks. And there were 20 lead changes among nine drivers.

“It was a great race for us and the two-team,” the 2012 series champion Keselowski said, noting he drove the same car Saturday as he used to win at New Hampshire earlier this summer. “I wanted to do a really cool burnout with it, but I want this car for [the championship race] Phoenix.”

“I’m really pumped. I don’t want to look too far ahead. The next round is going to be really difficult, but still, I’m really pumped about this performance and the way we’ve run on short tracks.”

“If we can get to Phoenix, we’re going to be really good,” Keselowski promised, not wanting to look too far ahead despite his impressive performance Saturday.

While Keselowski, 34, was clearly the class of the field, leading nearly four times as many laps as any other driver, Logano, Truex and Dillon did their best to keep him honest.

Dillon’s 55 laps led was the most he has ever led in a single race in his seven-year fulltime NASCAR Cup Series career. He missed pit road while coming to the pits for service late in the race – the only hiccup on his night. But his team recovered and it turned out to be of minimal consequence for an organization that has mightily impressed the first two weeks of the Playoffs.

Dillon finished runner-up to Harvick in last week’s Playoff opener at Darlington and now has a second top five heading to Bristol (Tenn.) Motor Speedway next week for the final race in this opening stage of the Playoffs.

“To come from the back [after the speeding penalty] and finish second in Stage 2 was just so awesome,” said Dillon, driver of the No. 3 Richard Childress Racing Chevrolet.

“This race team is on fire right now and showing up when it matters.”

Dillon, who won at Texas Motor Speedway this summer, has positioned himself to a much better Playoff run than many may have anticipated heading to the Bristol cutoff race next week.

On the other side, Truex kept up his consistent pace. His third-place run was his ninth top-five finish in the last 10 races,

Only the top 12 drivers among the 16 Playoff eligible will continue to contend for the season title following that Bristol race.

The series moves to Bristol for the Bass Pro Shops Night Race next Saturday (7:30 p.m. ET on NBCSN, PRN and SiriusXM NASCAR Radio).

Check out the results of the Federate Auto Parts 400. 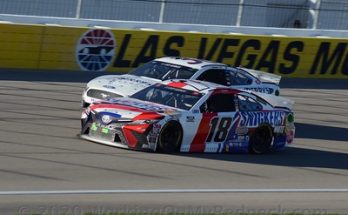