Go Fas Racing driver Corey LaJoie will make his sixth NASCAR Cup Series start at Richmond Raceway on Saturday night as the circuit visits the Virginia track for its lone event of the year after the impact of the COVID-19 pandemic caused a reconfiguration of the 2020 schedule.

GFR’s longtime partner, Keen Parts, will return to LaJoie’s Ford for the under-the-lights race at the .75-mile oval.

Throughout the company’s tenure with the No. 32 team, an abundance of CorvetteParts.net schemes have graced the team’s race cars, but three distinct Keen Parts schemes have appeared so far this season.

For the second race back from the 10-week hiatus at Darlington Raceway in May, the Ohio-based company honored all of the frontline workers, who continue to work tirelessly amid pandemic, with a special “Thank a Hero” livery. Five weeks later, the Corvette parts supplier unloaded a mask-wearing LaJoie scheme at Martinsville Speedway. At Kentucky Speedway in July, the classic gray and orange look was contested – the same scheme that will head to the 300-mile race at Richmond this weekend.

Through his five outings at the track, LaJoie has a best finish of 26th – which he tallied last year in the spring race while driving a Keen Parts-sponsored car.

Drydene Performance Products will assist in the GFR team’s efforts this weekend with an associate sponsorship on the lower quarter panels as the team looks to rebuild momentum following an unfortunate and early end to their battle in the Southern 500.

LaJoie on the upcoming race:

“Our entire team is excited to get Tom and TJ’s Keen Parts Ford on track at Richmond Raceway. This is a race the Keen’s almost always sponsor with our Go Fas team and we’re really happy to bring a sense of normalcy to them by running this car under the lights Saturday night. I’ve really enjoyed racing at Richmond since my K&N Series days when we had a lot of success there. Hopefully we can bring some speed to one of my favorite short tracks this Saturday.”

Looking back on the Southern 500:

Corey LaJoie started the Southern 500 from the 27th position at the historic Darlington Raceway. Just before the lap 25 competition caution, LaJoie relayed to crew chief Ryan Sparks that his car was turning good under throttle, but the air pressure would build it a little bit tight – while running in the 30th position. The North Carolina native made his way to the attention of the No. 32 pit crew for four tires, fuel and an air pressure adjustment after expressing the need for more right-rear grip and turn, just before the lap 82 caution. Under the yellow flag, the Go Fas Racing Ford took the wave around to obtain a lap bac

Following stage one, LaJoie requested assistance for more left-front turn and said he landed free into the corner. On lap 132 of the 367-lap event, LaJoie was running in the top-25 in the 24th position. A caution on lap 180 permitted LaJoie to take another wave around, but the team would restart on older tires. LaJoie restarted in 27th on lap 185. Fifteen laps later, he fell to 29th while reporting that his car was still building too free over the course of the run. The 28-year-old finished 28th in stage two.

A chaotic restart on lap 236 for the final stage caused damage on LaJoie’s Ford, knocking the radiator out of place. With damage too severe to continue, LaJoie was credited with a 37th-place finish at the track dubbed “The Lady in Black.” The GFR team will regroup and head to Richmond Raceway on Saturday for another night race with Keen Parts. 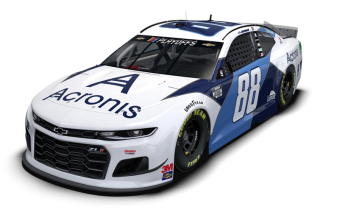 Bowman Needs A Win At Texas

Byron: Texas Is A Compromise