Kaz Grala and the No. 21 Ruedebusch.com Chevrolet Camaro at Richmond Raceway … Kaz Grala will return to the seat of the No. 21 ruedebusch.com Chevrolet Camaro for a double-header weekend at Richmond Raceway. This weekend’s double-header will mark the Boston native’s third and fourth starts of the season in the NASCAR Xfinity Series for Richard Childress Racing. Grala most recently made his Cup Series debut a few weeks ago at the Daytona Road Course, where he finished in the seventh position.

Talk a little bit about the advantages and disadvantages of a double-header weekend.
“I’m really excited to run two races at the same track in a weekend. I think that will help me get warmed up, especially before the second race on Saturday. I think it will definitely take away some of the disadvantages I usually face while only running part-time. Richmond is a fun place, which I really enjoy racing at. To me, Richmond Raceway is such a rhythm track. I think having the opportunity to run two races and 500 laps total is really going to benefit us. The only unknown or disadvantage I can think of is, I have never raced at Richmond during the day. It will be interesting to see how much the track changes in the heat of the day. I’m really not sure what to expect. I know it will be a lot different, but I’m confident my team will prepare for that and we’ll have a really fast ruedebusch.com Chevrolet for both races.”

You’ve had a strong start to the 2020 season in the races you have competed in. What are the expectations for this weekend at Richmond Raceway?

“The goal is always to contend for the win. I don’t see any reason why we shouldn’t be able to. I have all the confidence in my crew chief, Andy Street, and my entire No. 21 Richard Childress Racing team. I think if we can just go out there and have a solid top-five day in our No. 21 ruedebusch.com Chevrolet, we can put ourselves in position when it matters most. If we can have a strong performance in the first race, I think that will translate to the second race as well.”

NASCAR Playoffs … Austin Dillon is in the midst of his fourth NASCAR Playoffs appearance and currently ranks eighth among the 16 Playoff-eligible drivers following a second-place finish at Darlington Raceway. Dillon is 10 points above the cut line with two races remaining (Richmond & Bristol) in the Round of 16.

Catch the Action …The NASCAR Xfinity Series’ Go Bowling 250 at Richmond Raceway will be televised live Friday, September 11, beginning at 7 p.m. ET on NBC Sports Network and will be broadcast live on the Motor Racing Network and SiriusXM NASCAR Radio Channel 90.

The NASCAR Xfinity Series’ Virginia is for Racing Lovers 250 at Richmond Raceway will be televised live Saturday, September 12, beginning at 2 p.m. ET on NBC Sports Network and will be broadcast live on the Motor Racing Network and SiriusXM NASCAR Radio Channel 90.

The NASCAR Cup Series’ Federated Auto Parts 400 at Richmond Raceway will be televised live Saturday, September 12, beginning at 7:30 p.m. ET on NBC Sports Network and will be broadcast live on the Motor Racing Network and SiriusXM NASCAR Radio Channel 90. 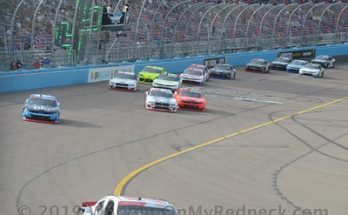 Championship 4 To Be Decided At Martinsville