After a swing of oval races, Ed Carpenter Racing returns to road course competition this weekend at Mid-Ohio Sports Car Course. Rinus VeeKay will spend his birthday weekend continuing his fight for the Rookie of the Year title on the heels of his career-best finish. Coming off two Top 10 finishes of his own in the last doubleheader, Conor Daly will settle back into his U.S. Air Force Chevrolet with ECR.

When the NTT INDYCAR SERIES adjusted the 2020 schedule, the Mid-Ohio race weekend was changed to feature two full-length, points-paying races in less than 24 hours. Originally scheduled for August 8-9, the Honda Indy 200 was recently moved to September 12-13. Yesterday, the Ohio Department of Health granted a spectator variance due in part to the venue’s unique, large outdoor facility. Attendance will be limited to 6,000 spectators, and social distancing and masks will be required in accordance with state health guidelines.

VeeKay will climb back into the No. 21 SONAX/Autogeek Chevrolet after his most successful race weekend to date. The NTT INDYCAR SERIES last raced at World Wide Technology Raceway in St. Louis two weeks ago. After finishing 6th in the first of the doubleheader events, the Dutchman finished 4th in the second. One week prior to securing his career-best finish, VeeKay started 4th in the Indianapolis 500. His qualifying effort was the highest of all Chevrolet-powered drivers and the best by a teenager in ‘500’ history.

Mid-Ohio will mark the first road course event for the NTT INDYCAR SERIES since the Road America doubleheader. As such, it will be Daly’s first time back in the No. 20 U.S. Air Force Chevrolet since mid-July. Daly steps into the No. 20 for the road and street course events while team owner Ed Carpenter drives in the oval races. As the COVID-19 pandemic has caused several NTT INDYCAR SERIES events to be cancelled or rescheduled, Carpenter competed in U.S. Air Force colors for the Iowa Speedway and WWT Raceway doubleheaders to make up for missed events. Daly drove for Carlin in those four events, earning his first career pole position at Iowa.

VeeKay, who will turn 20 on Friday, was signed as Ed Carpenter Racing’s full-time driver for 2020 on the heels of a successful test at Mid-Ohio Sports Car Course last October. It was his second test with ECR and confirmed his compatibility with the team. Though this will be his first NTT INDYCAR SERIES weekend at Mid-Ohio, he is no stranger to doubleheaders at the 2.258-mile road course. Each Road to Indy event over the past three years featured two races in two days and VeeKay never finished off the podium. In 2018, he won both races on his way to his Indy Pro 2000 championship.

Daly has competed in the NTT INDYCAR SERIES race at Mid-Ohio three times in the past four years. He started 22nd in his 2016 debut but powered his way through the field. Daly finished 6th after leading 22 laps. He followed up that performance with another Top 10 finish in 2017. The 28-year-old will race for ECR in the final five races of the 2020 season, including the two this weekend at Mid-Ohio.

Saturday’s schedule will feature a 75-minute practice session, split qualifying groups and Race 1 of the Honda Indy 200. The race broadcast will begin at 4:30 p.m. ET on NBC Sports Network with the green flag scheduled for 5 p.m. ET. On Sunday, another split-group qualifying session will kick off the day. Race 2 will be broadcast on NBC, beginning at 1 p.m. ET, with the green flag five minutes later.

CONOR DALY, No. 20 U.S. Air Force Chevrole: “I’ve always enjoyed going to Mid-Ohio, such a great track in the Midwest. I’ve had some reasonable success there, qualified decent and led some laps. It feels like forever since we’ve been to a road course so it will be nice to get back to that! Hopefully we’ll qualify up front, finish up front and get a lot of points.”

RINUS VEEKAY, No. 21 SONAX/Autogeek Chevrolet: “I’m very excited we’re finally going to Mid-Ohio! We’ve been waiting a while to find out if it was going happen. I had a very important test with Ed Carpenter Racing there last October. Good memories already with the team! Also, I have good memories in the Road to Indy where I never finished off the podium and have two wins. I love the track and the atmosphere around it. The season is getting close to the end now. We’ve had a few good races and it’s important to keep this momentum going!” 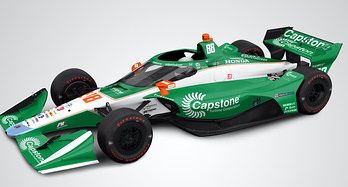