The last time the NASCAR Gander RV & Outdoors Truck Series (NGROTS) raced at Richmond (Va.) Raceway in 2005, Tanner Gray was six years old. Now Gray is 21 and ready for his first race at the three-quarter-mile oval. Coming off a disappointing finish last Sunday at Darlington (S.C) Raceway when he spun late in the race and finished 29th, he is ready to put that behind him and focus on the next race.

In 15 Truck Series races this season, Gray has two top-five, five top-10 finishes, has led four laps and sits 13th in the driver point standings. It has been a challenging season for Gray and the rookie class going to new tracks without any practice, or qualifying for a majority of the races. Thursday at Richmond, most of the field will be making their first start there along with Gray.

He has spent time preparing for Richmond by watching film of recent races there. He also has veteran resources for advice leading up to the race with team co-owner David Gilliland who has 23 starts at Richmond in the NASCAR Cup and Xfinity Series, DGR-Crosley teammate David Ragan with 30 starts there, crew chief Shane Wilson who has 29 starts with two Xfinity Series wins and long-time spotter Kevin Hamlin.

The NGROTS 250 from Richmond Raceway will be run on Thursday, Sept. 10 at 8 p.m. ET. The race will be broadcast live on FS1. The 250-lap race will be broken into three segments with stage-ending cautions on laps 70 and 140.

Gray on Richmond: “Richmond looks like a fun track for the trucks. I’ve heard a lot of good things about it and I’m excited it was added to the schedule. It’s nice going to some of these tracks like the Daytona road course, Darlington and now Richmond where hardly anybody has experience there. It’s kind of an equalizer that most of us are in the same boat with never having turned a lap there before the race starts. Hopefully we can have a good run and get back into a rhythm for the upcoming races.” 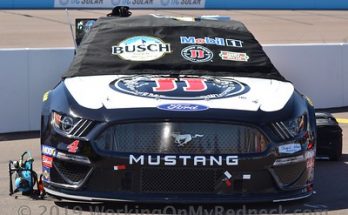