No Pit Crew At Gateway… The modified version of the pit-road procedures for Sunday’s event will be similar to pit stops at Eldora Speedway – teams may choose to pit or not during stage breaks and the field is frozen at that time. Those who pit will have three minutes to complete their work during the stage breaks. If a team goes over that time, they will be sent to the rear on the ensuing restart. The order drivers enter pit road is the order they will line up off pit road. Trucks that elected to pit will line up behind those trucks remaining on track. Additionally, all caution periods will be quickie yellows, meaning there will be one opportunity to add fuel and/or make adjustments and there will be no changing of tires except during stage breaks.

Eye In The Sky… Enfinger’s full-time NASCAR Cup Series spotter, Chris Lambert, will be at Daytona International Speedway this weekend, therefore Joe White, who last spotted for the ThorSport Racing driver at the Gander Trucks event at Kansas Speedway, will assume the duty on Sunday at WWT Raceway.

Music To Our Ears… Curb Records singer/songwriter, Filmore, and his new album “State I’m In,” will make their 2020 debut on board the No. 98 Ford F-150 in Sunday’s CarShield 200. To preview the single, State I’m In, visit: Curb.com.

Triple Truck Challenge… Sunday’s 160-lap event at WWT Raceway, marks the third and final race in the “The Trip” and Enfinger’s final chance to claim the $50,000 bonus.

2020 Vision… In 13 starts this season, Enfinger has two wins and 11 Playoff Points with only three races remaining in the Regular Season. However, if the Playoffs were to start today, the ThorSport Racing driver would be ranked fourth on the Playoff grid with 14 points.

Take Me Back – Dover… Enfinger started eighth, based a performance-based metric, finished eighth in Stage 1 and 17th in Stage 2, due to a loose wheel, and the FarmPaint.com driver finished 13th in the KDI Office Technology 200 at Dover International Speedway.

“Gateway is a track I feel like owes us a little bit. The last couple years we’ve led a lot of laps and we’ve had an F-150 capable of winning each of the last couple races there, and it just hasn’t played out the way we needed it to at the end. Hopefully we can get a little redemption this weekend. The track will be a little bit different Sunday. The last couple of years they’ve used the PJ1 in the middle groove there, this year they aren’t doing that – I’m assuming it’s because we’re running with Indy Car and they usually don’t run PJ1. The other big difference this weekend is, no pit crews. We only have a chance to change tires during the two stage breaks – so that’ll be a little bit different – the only other time we do that is at Eldora. So, we can take fuel at different times of the race, if we want to, but the only time we can take tires is during the stage breaks. So, I really don’t feel like there’s gonna be a ton of strategy played out, I guess if someone wants to be risky, they can avoid changing tires on one of the stage breaks, but I honestly don’t see that happening this time around, especially since it’s gonna be hot and slick out there. I’m definitely looking forward to the challenge.” 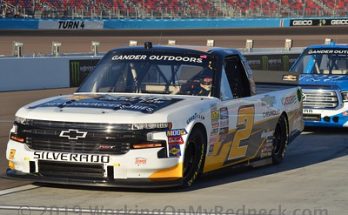 Briscoe Had A Down Texas

Cindric Logs A Top 5 At Texas