With six races in the next four weeks to set the 2020 NASCAR Cup Series Playoff field and several of the sport’s top drivers still looking to solidify themselves as legitimate championship contenders, intensity and motivation are at a season high.

And the two-mile Michigan oval, located an hour from Detroit – the automaker capital of the world – will present its prestigious Heritage Trophy to the car manufacturer that either sweeps the two-race slate or earns the most points based on the top-10 finishers in each race.

“Obviously with it being my home track, there’s a little bit of extra motivation as far as trying to win the race,” said Jones, who drives the Joe Gibbs Racing No. 20 Toyota.

“Really, it would be one, if not the biggest win of my career if we could go out and win one the races this weekend at Michigan. I think that would be pretty special to me. I grew up a little bit over an hour from the track so getting down there and racing is always a pleasure.

“Michigan has been a good place for us. We’ve had some really strong runs there and I think we have some good notes and plans as far as what we have to do to have a good weekend at Michigan in the doubleheader.”

And that goes beyond the sentimental feeling of winning at home.

Looking at just the championship standings, 14th-16th place drivers Clint Bowyer, DiBenedetto and William Byron are separated by only 28 points. Fourteenth place Bowyer holds only a 43-point edge on Reddick. Byron has only a 15-point cushion on Reddick, who won an Xfinity Series race at Michigan last year.

Ten drivers have secured their Playoff positions with victories, however, the list of those still vying for their first trophy of the year features some pretty impressive names. Like the reigning series champion, Kyle Busch.

Busch has endured unbelievably poor luck – scoring four finishes of 30th or worse – and yet still is in position to make the Playoffs to try and become the first back-to-back champion since Johnson won five straight from 2006-2010. “Pointing” his way into contention isn’t the standard Busch is used to, however, and it’s made each race feel more like a “must win” to put his title hopes back on track. He won at Michigan in 2011 and is riding a string of six consecutive top-10 finishes at the track.

Nine active drivers have victories at Michigan – six of them multiple trophies. Kurt Busch, Matt Kenseth, Joey Logano and championship leader Kevin Harvick have a series-best three wins each. Denny Hamlin and Ryan Newman have a pair of trophies and Bowyer, Johnson and Kyle Busch have one win each.

Of those former winners, Kenseth, Newman and Johnson are still needing to win their way into title contention. Not only does Kenseth have three wins but the car he’s driving this season, the No. 42 Chip Ganassi Chevrolet, has three wins with previous driver Kyle Larson at Michigan.

Fords have won the last four races since Larson’s string of trophies(2016-17) – with championship leader Harvick winning twice in that span including last year. Harvick has four runner-up finishes in addition to those wins since 2014. And Harvick’s No. 4 Stewart-Haas Racing Ford team arrives in Michigan riding a streak of seven top-five finishes in 2020.

“We’re just kind of grinding away,” Harvick said. “We kind of got behind at New Hampshire (last week) and were able to make up a lot of ground. Our team is doing a great job and we’re doing what we need to do each week and we’ve been fortunate to win a few races and we’re ready to get through the final few races before the Playoffs start.”

Bristol: What To Watch For 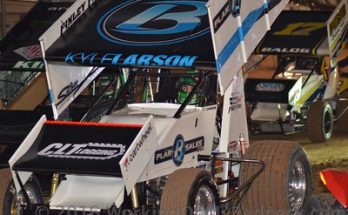