For the 11th time in 2020, and for the sixth time in as many tries, Elk Grove, California’s Kyle Larson is an Ollie’s Bargain Outlet All Star Circuit of Champions presented by Mobil 1 main event winner, doing so in convincing fashion at the Plymouth Dirt Track in Plymouth, Wisconsin, on Thursday evening, July 30. Scoring a monstrous $26,000 payday in the process, Larson’s Plymouth victory occurred during the second running of the Rayce Rudeen Foundation Race, eventually topping a stout field of not only traveling All Stars, but also full-time IRA Outlaw Sprint Series contenders, and a handful of regional and national invaders.

Forced to navigate slower traffic for much of his campaign around the Plymouth bullring, Larson was quick to prove he was the class of the field, utilizing the outside-pole position to hunt down pole sitter and race leader, Gio Scelzi, by lap 12, eventually running away to a near-two and a half second advantage by the end of 35 circuits.

“This feels really good,” Kyle Larson said, driver of the Paul Silva-owned/Finley Farms/Tarlton and Sons/Durst/Lucas Oil/Priority Aviation/No. 57 sprint car. “I had to earn it, for sure. The track was extremely technical and the curb wasn’t going anywhere. It made it trickier and trickier to run. The lappers were all so even with each other and I couldn’t get by some of them for such a long time. I really wasn’t sure how close second was to me, but once I got by some lapped cars, I was able to get a good rhythm going. This is such an awesome crowd. A big thanks to Kevin Rudeen and his entire family for what they do for this event. It’s not often that you get to race for this much money in a sprint car.”

After a pair of cautions during the initial start, one of which a red flag incident involving Austin McCarl, the third try proved to be the charm with KCP Racing’s Gio Scelzi earning the jump. The California hotshoe would lead the first six laps unscathed before entering traffic for the first time on lap seven.
The back of the field, mixed with an unforgiving cushion, proved to be a handful for Scelzi, as Larson quickly ran down the familiar No. 18 and was applying pressure by lap ten. Just two circuits later, it was Larson who was in control of the field, using a sleek move through the bottom of turns three and four to drive underneath Scelzi to lead lap 12.

By lap 17, the ‘Madman’ Kerry Madsen was the new man in charge of the runner-up position, wasting little effort to get by Scelzi before turning his attention to Larson. Despite a desperate effort by the Australia-native, Larson proved to be too much to overcome in traffic, solidifying his place in Plymouth Dirt Track victory lane with a three-wide move to put two lapped cars between himself and Madsen’s No. 2M.

“I don’t think I could have went many more laps,” Larson continued. “I was happy to see the checkers come out.”

At one point, Madsen was in striking distance, eradicating all lapped cars between himself and the race leader just beyond the midpoint of the 35-lap contest. Although unable to catch ‘Yung Money,’ Madsen held on to finish second, followed by Gio Scelzi, Dominic Scelzi and Cory Eliason

“During the middle stages there, things were really looking good for us,” Kerry Madsen said, driver of the Killer Instinct Crossbows No. 2M. “I didn’t force it with lapped cars probably like I should have. We had a great race car and the guys are working hard. I want to get some ‘W’s’ for this team. We have a long weekend ahead so hopefully we can climb our way to the top.” 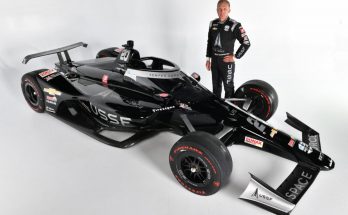 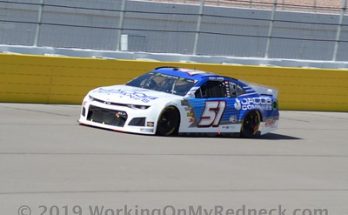