Austin Cindric and the No. 22 XPEL Ford Mustang team won two stages and led the most laps on the way to a second-place finish in the Kansas Lottery 250 at Kansas Speedway. The Mooresville, N.C., native led a total of 131 laps and won both Stage 1 and Stage 2. He became just the fourth Xfinity Series regular to win two stages twice in a season. Cindric racked up his 11th top-five in 17 races this season and claimed his eighth finish of third or better. The driver of the No. 22 XPEL Mustang grabbed the lead in the NASCAR Xfinity Series driver standings, four points ahead of Chase Briscoe.

Cindric started the race fourth after the field was set per random draw. The 21-year-old surged to the lead on lap 10 and stayed there. He stayed on the track during a competition caution on lap 20, telling crew chief Brian Wilson his XPEL Mustang was a tick tight. He restarted as the race leader with 15-laps remaining in the first 40-lap stage. Cindric quickly drove away from the field, crossing the finish line 3.5-seconds ahead of second-place when Stage 1 concluded. He won his sixth stage of the 2020 season and made a pit stop during the stage caution for four tires, fuel, and small adjustments. Solid work on the pit lane by the XPEL crew kept Cindric in the lead.

In Stage 2, the driver of the No. 22 Mustang led wire-to-wire for his seventh stage win of the season, but it wasn’t easy. Harrison Burton applied pressure in the closing laps but Cindric held firm to the top spot. Wilson made the call to pit during the stage caution for four tires, fuel, and small adjustments and once again excellent work by the No. 22 crew kept Cindric as the leader.

Cindric reported a vibration on lap 89 soon after the race went green but pressed forward throughout the final stage. He maintained a 2-second lead over Burton before a cycle of green flag pit stops began. Wilson made the call to pit on lap 127 for four tires and fuel and Cindric moved back into the lead when the cycle was complete on lap 145.

As the race entered its closing laps, Burton was the only one that could challenge Cindric for the win. Cindric slipped back to second on lap 158 but caught a break when the fourth caution of the race wiped out Burton’s lead. A round of pit stops followed on lap 165 and Cindric once again won the race off pit road. He lined up second for the first attempt at a NASCAR Overtime restart but a caution moments after the green flag forced another restart on lap 173. Cindric took the lead one lap later but slipped to second-place on the final lap.

The NASCAR Xfinity Series is back in action Saturday, August 8 with the Henry 180 at Road America with coverage starting at 12:00 p.m. ET NBCSN, MRN, and Sirius XM NASCAR Radio.

Quote: “There are about 20 things I feel like I should have done differently at the end with the XPEL Mustang. It was difficult because up higher was preferred all day and you could usually generate momentum. I was probably tighter than I needed to be at the end. Congrats to Brandon (Jones) because he earned it. He went from seventh to the lead in two laps. Overall, it just wasn’t in the cards for four in a row.” 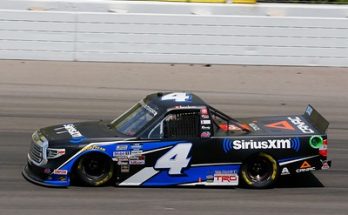 Lessard Had An Up And Down Martinsville 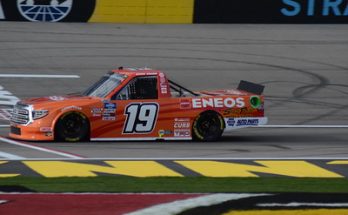 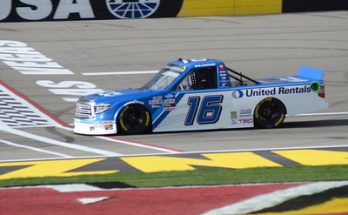 Austin Hill Returns To HRE For ’21