During an update Thursday on NASCAR’s investigation into a noose found in Bubba Wallace’s garage stall on Sunday at Talladega Superspeedway, NASCAR president Steve Phelps quickly dispelled any insinuation that the incident was a hoax.

“Bubba Wallace and the 43 team had nothing to do with this,” Phelps said, responding to negative assertions by conspiracy theorists on social media. “Bubba Wallace has done nothing but represent this sport with courage, class and dignity.

“It is offensive seeing anyone suggest otherwise, and frankly, it’s further evidence of how far we need to go as a society.”

In recent weeks, Wallace had been an outspoken advocate of banning the Confederate flag from properties where NASCAR races, a policy the sanctioning body has adopted. In that context, it was a natural assumption that the driver might have been targeted and that an investigation was warranted.

After the garage stall pull-down rope fashioned as a noose was discovered by a member of the No. 43 team on Sunday afternoon, an investigation conducted by 15 FBI field agents was launched. The FBI concluded that the noose had been present in the same garage stall as early as last October’s NASCAR weekend at Talladega and that no federal hate crime directed at Wallace had been committed.

Before the teleconference with Phelps, NASCAR released a photo of the noose in the garage stall. The sanctioning body continued its own investigation into the origin of the noose and conducted an inventory of all garage stalls at the 29 tracks that host NASCAR Cup Series events.

“NASCAR conducted a thorough sweep of all the garage areas at tracks where we race,” Phelps said. “Across those 29 tracks and 1,684 garage stalls, we found only 11 total that had a pull-down rope tied in a knot and only one noose—the one discovered on Sunday in Bubba Wallace’s garage.

“We further determined that the noose was not in place when the October 2019 race weekend began but was created at some point during that weekend. Given that timing, and the garage access policies and procedures at the time, we were unfortunately unable to determine with any certainty who tied this rope in this manner or why it was done.”

Phelps then asked rhetorically how the noose could have gone unnoticed by so many people in October 2019 and on the morning of June 21, 2020.

“Our ultimate conclusion for this investigation is to make sure this never happens again, that no one walks by a noose without recognizing the potential damage it can do,” Phelps said. “Moving forward, we’ll be conducting thorough sweeps of the garage area to ensure nothing like this happens again, and we’re installing additional cameras in all of our garages.

“We’ll make any changes necessary to our sanctions and our code of conduct, and we will mandate that all members of our community complete sensitivity and unconscious bias training, with specifics and bias forthcoming. Going forward, our efforts are best spent on making sure every competitor feels safe, and every guest feels welcome.”

Phelps emphasized, however, that the results of the investigation should not diminish the heartfelt show of support Wallace received from his fellow competitors and their crew members, who—believing he had been targeted and threatened—escorted him to the head of the grid before Monday’s rain-delayed GEICO 500 and stood in solidarity with him.

“NASCAR showed its true colors on Monday—our drivers, our crews, anyone at the racetrack, but more importantly, all the fans that watched it on TV,” Phelps said. “I watched it on television, and I’m not embarrassed to say, I cried.

“It was an emotional, moving moment for our sport and I think an important one that suggests that NASCAR is welcome to all.” 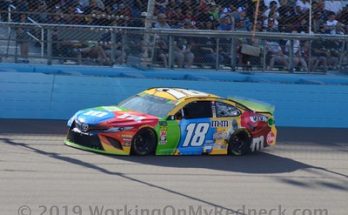