Just three days after a grueling 500-miler in the sweltering Georgia heat, Matt DiBenedetto and the No. 21 Motorcraft/Quick Lane team are in for another endurance test in the form of a 500-lapper at Martinsville Speedway.

NASCAR’s revised schedule, created in response to the coronavirus, moved Martinsville’s spring race to this Wednesday night, where it is sandwiched in between races at Atlanta Motor Speedway and Homestead-Miami Speedway, which will host a 400-miler on Sunday afternoon.

DiBenedetto said he came through Atlanta’s race in good shape physically and is ready to take on Martinsville’s paper-clip-shaped half mile oval.

“When I got out of the car at Atlanta a lot of guys looked pretty wiped out, but I actually felt pretty good,” he said, adding that he attributes that to keeping himself hydrated before and throughout the race and to his team’s pre-race work on the No. 21 Mustang. “It’s a real testament to the team’s preparation of the driver comfort and cooling features of the car.”

DiBenedetto said he’ll be needing more of the same from the Motorcraft/Quick Lane team Wednesday night.

“Martinsville is one of the most physically demanding tracks we go to,” he said. “You never get a break there.”

But that doesn’t mean he doesn’t like racing there.

“Short tracks are my favorite by far,” he said. “I’d be lying if I said anything different.”

DiBenedetto said he’s anxious to see how the Goodyear tire compound performs. “The new tire has more lap time fall-off during a run,” he said. “That should to be fun.”

He also said he’d especially like to run well at Martinsville since it’s the home track for his Wood Brothers team, which is from nearby Stuart, Va.

“Hopefully we can get the Wood Brothers a good finish because I know how much that track means to them.”

DiBenedetto will start Wednesday’s Blue Emu Maximum Pain Relief 500 from 19th place, as teams drew for starting positions since no qualifying will be held. That means he’ll have work to do immediately once the green flag drops.

“Track position is big at Martinsville,” he said. “We’ll have to climb through the field, but it’s a long enough race that we can get back up there where we belong.”

There will be no practice before the drop of the green flag Wednesday night, which is scheduled for just after 7 p.m. 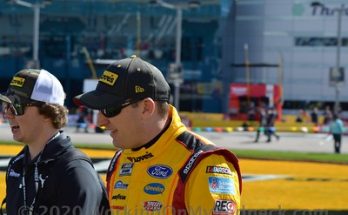 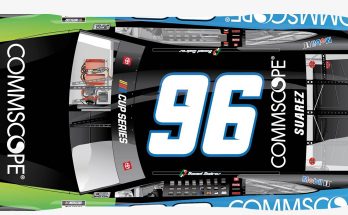 Suarez Preps For Left And Right Turns At Daytona