The No. 10 Smithfield / #GoodFoodChallenge Ford Mustang team for Stewart-Haas Racing (SHR) returned to live racing Sunday at Darlington (S.C.) Raceway, where driver Aric Almirola started fifth by a random draw and finished 12th to advance one position in the NASCAR Cup Series playoff standings. The team sits seventh with 151 points – 67 out of first place. SHR teammate Kevin Harvick dominated the race to earn his first win of the season.

Almirola raced inside the top-five in the first stage and earned six stage points. He was forced to race his way back through the field after an uncontrolled tire penalty forced him to the rear of the field in the second stage. He gained four positions on the final restart and held the Smithfield/#GoodFoodChallenge Ford just outside the top-10 before the checkered flag waved. He was the second highest-finishing SHR driver.

“Overall, it was a good day after earning some stage points and moving up in the standings, but we’ve got some rust to knock off,” Almirola said. “The Smithfield car was good until we lost track position and, when we finally had the opportunity to run back toward the top-10, it was toward the end of the race. We definitely learned a lot that we can take back on Wednesday. That’s the good thing. We know where our weakness is and now we just need to get

buttoned up and run a clean race.”

Without a single practice lap or qualifying, Almirola and crew chief Mike Bugarewicz were put to the test. Communication was key and patience led the team to progress in the point standings.

“We have a few areas to fine-tune on our team,” Bugarewicz said. “We show potential every week to run top-10 and top-five. We just need to clean up a few areas and we’ll be in good shape.”

Advancing one position in the standings wasn’t the only positive during the team’s return to racing. Almirola and Smithfield teamed up to bring meals to families in need through Smithfield’s #GoodFoodChallenge.

Fans and industry members have rallied around the cause with an abundance of social media posts during Sunday’s The Real Heroes 400. Almirola and the Smithfield/#GoodFoodChallenge Ford team look to continue that charitable momentum Wednesday night.

Wednesday’s race will also again support The Real Heroes project by recognizing a front-line health care worker by replacing Almirola’s name above his driver-side door with that of Clayton Vaught, a supervisor of diagnostic radiology at Novant Health Presbyterian Medical Center. Vaught’s work ethic is said to be second to none. He is thought of as a tremendous leader and team player. He works at Novant Health and Stone institute, a urology group that takes care of kidney stones. Vaught is a die-hard NASCAR fan who, throughout the years, has hosted a group of more than 30 fans at the Charlotte (N.C.) Motor Speedway campgrounds and fires up the grill for everyone involved. Clayton is in the market for a new favorite NASCAR driver.

“It’s people like Clayton who make all of this possible,” Almirola said. “Without our front-line health care workers, we wouldn’t be racing on Wednesday. Hopefully, I can win him over and gain a new fan.”

Aric Almirola: Driver of the No. 10 Smithfield/#GoodFoodChallenge Ford Mustang for Stewart-Haas Racing:

How was it finally getting back to racing?

“I’m proud of everybody. I’m proud of NASCAR for being the first sport to get things going again. It was kind of eerie to walk out to pit road and not see anyone in the grandstands, but it sure felt good to get back in the racecar and that thrill of competition was much needed. I hope everybody enjoyed it and I hope everybody started getting their fix on sports from watching us race. We’re one step closer to getting back to normal.”

What would it mean to win at Darlington?

“It is such a physically demanding track, it’s such a demanding track on the car, on the crew, on everybody. When you win at Darlington, you’ve done something. Darlington is just a really tough racetrack. It’s called ‘Too Tough to Tame’ and the ‘Lady in Black’ for a reason. It such a challenging place. To go there and have success, to walk away with a trophy, is a bucket list kind of race that you want to win.”

● #GoodFoodChallenge: As a food company, Almirola’s longtime sponsor Smithfield Foods has a responsibility to ensure the continuity of our nation’s food supply during this difficult time. In doing so, it has committed to donating more than 40 million servings of protein to Feeding America and its nationwide network of food banks in response to COVID-19. As the company continues to help communities across America, it invite everyone to join its journey in support of Feeding America by participating in the Good Food Challenge. Participating is easy – simply type the three words of the hashtag #GoodFoodChallenge on social media to automatically donate 10 meals to Feeding America on behalf of Smithfield Foods. Donations can also be made via the www.SmithfieldGoodFoodChallenge.com to donate. With such a simple task, large amounts of protein can be made to food banks across the nation. 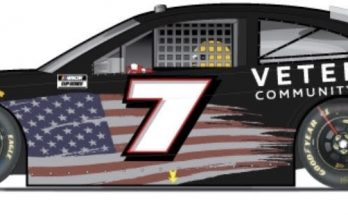 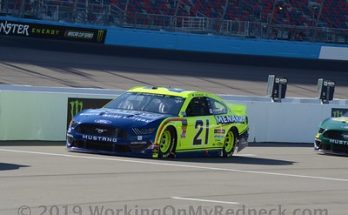