Improving one position is Clint Bowyer’s goal Sunday when the Monster Energy NASCAR Cup Series returns to Texas Motor Speedway in Fort Worth, where Bowyer piloted his Stewart-Haas Racing (SHR) Ford Mustang to a second-place finish on March 31 – the most recent Cup Series race on the ultra-fast, 1.5-mile oval.

After enjoying one of their most successful races by sweeping four of the top eight places, Bowyer and his SHR teammates return to Texas this weekend armed with Mobil 1 technology and a lot of positive thinking.

“Can you imagine if we were to win in Texas?” asked Bowyer, who celebrated with fans in the grandstands after winning at Martinsville (Va.) Speedway in March 2018. “We would make Texas the wildest victory lane you have ever seen. Throw in Mobil 1 and Rush Truck Centers folks and (track president) Eddie (Gossage) and all his people at Texas Motor Speedway, I guarantee it would be one of the best victory lane celebrations NASCAR fans have seen this season.”

Bowyer has plenty of incentive at Texas. It would mark his 11th career Cup Series victory and first at Texas, as well as his first of 2019. A two-time winner in 2018, Bowyer owns seven top-five finishes this season but has fallen short of a personal and team goal of visiting victory lane. He’s also battling to remain in the top-10 in the season standings after finishing 34th at Martinsville last Sunday, when a cut tire and broken track bar ended his race early. That left him to 11th in points, 36 markers out of 10th place in the standings. Bowyer has ended the season in the top-10 five times in his Cup Series career.

“Finishing in the top-10 is important to us,” he said. “We have worked really hard this year and the guys on our No. 14 crew, as well as everyone at SHR, Ford and Roush-Yates Engines, have put a lot of time and effort into getting us faster. I’m confident we’ll be in the top-10. We just have to close out these last three races.”

Bowyer should be one of the favorites at Texas. He owns four top-five finishes in his career at the Speedway Motorsports-owned facility.

In March, he started 25th and led laps 80 through 82. He gave up the lead with four laps left in the first stage to finish 15th. He started third in the second stage but fell back to 10th battling with a loose racecar before finishing 11th. He started the final stage 12th and climbed to fifth by lap 200 and second by lap 224. Bowyer couldn’t catch eventual winner Denny Hamlin in the closing laps and finished just 2.743 seconds back. Bowyer’s second-place result equaled his previous best finish at Texas – second in April 2011.

“Our car wasn’t lightning fast all day long but, as they started slip-sliding around and struggling, we’d kind of prevail on those long runs,” said Bowyer, whose good friend Blake Shelton watched the race from his pits. “I expect you’ll see a similar type of race this weekend.”

The March 31 race in Texas saw SHR place all four of its Ford Mustangs in the top eight. As an organization, it marked one of SHR’s most impressive performances as Daniel Suarez finished third, Aric Almirola seventh and Kevin Harvick eighth to go with Bowyer’s runner-up finish.

One of the many factors that played into success that afternoon was Mobil 1 lubricants in all SHR Ford Mustangs. Bowyer will not only have Mobil 1 inside his No. 14 Mustang but on its hood this weekend in Texas as his car carries the decals of Mobil 1 and Rush Truck Centers.

Now, more than four decades later, Mobil 1 remains the world’s leading synthetic motor oil brand. It has pushed forward the boundaries of automotive lubricant technology, evolving and improving to keep engines running like new, mile after mile, since 1974. From its vital role in the world of motorsports to its many scientific breakthroughs, Mobil 1 motor oil has a rich story with plenty of twists and turns.

In its 17th consecutive season as the “Official Motor Oil of NASCAR,” Mobil 1 is used by more than 50 percent of teams throughout NASCAR’s top three series. It also provides primary sponsorships on the Mustangs of Bowyer and Harvick at SHR during various Cup Series races throughout the year. The Mobil 1 brand also serves as an associate sponsor for all four SHR drivers at all other races. Since 2011, ExxonMobil has been providing lubricant technology support to the SHR team, which helped drivers Tony Stewart and Harvick earn series championships for SHR in 2011 and 2014.

Bowyer, Harvick, Almirola and Suarez hope to once again demonstrate the Mobil 1 and SHR advantage at Texas this weekend, like they did in March. If he does, the first to greet him in victory lane would be Rusty Rush and friends from the San Antonio-based Rush Truck Centers, whose decals will also be on the No. 14 at Texas.

Rush Truck Centers has been the primary partner on the No. 14 team since Bowyer arrived in 2017 and has been with the SHR organization since 2010. The San Antonio-based company with more than 120 locations and 7,000 employees has used Bowyer and the team to appeal to NASCAR fans as one way to recruit the technicians it needs to operate the largest network of commercial truck and bus dealerships in the country, with locations in 22 states.

“I always like going to Texas,” Bowyer said. “It is a lot of fun. Hardest thing there is balancing a little fun and your job. Everything is more fun in Texas.”

Especially if he can finish one spot better.

What are your goals in racing?

“I want to win races. I want to a championship. It’s always been that way. Once you win a race at this level, the next goal is a championship. It’s as simple as that. You start off every year to win your first race, and then as many as you can, and compete for a championship. We’ve been a part of years where I’ve been part of that conversation and I’ve had years where I haven’t and, for me, over the years it’s hard to pinpoint without pointing fingers or anything else other than just looking at yourself in the mirror. I mean, sometimes there were reasons and sometimes there weren’t and I should have performed better. I’m with a manufacturer that’s dedicated to that goal (winning races and championships). I’m with an organization that’s dedicated to that goal and certainly a race team, so that’s the goal. I love this sport. It’s fun. I love you guys. Everybody works their butt off to bring in the show. Call us whatever, but that’s our job and to come in and set up shop, put on a show and tear it down and go to the next one and I like that life.”

Can you be more aggressive with drivers still in the playoffs since they have more to lose?

“Whether I was in it or out of it or anything in between, you’re full force. You’re coming here to win the race no different than anybody. It doesn’t matter if we were racing, that’s the unique thing about the predicament we have with our playoff system. It’s not like the NFL, where you go home and it’s just two teams putting on a show. There are 40 of us still out there putting on a show and, that being said, I’m at one of my best racetracks. Whether I’m in the playoffs or out of the playoffs or anything in between, I feel like I have a shot at winning at this place.”

Does Mobil 1 provide you and SHR an advantage?

“I know you hear drivers talk about the importance of corporate partners all the time and that’s true, but at SHR, they are a key to our success on the track. Mobil 1 is such a source of technology under the hood and it’s a real advantage for us. Our success illustrates the technological advantages Mobil 1 is giving us on the track every single week.”

How important is San Antonio’s Rush Truck Centers to you?

“Rush is one of my strongest supporters. Rusty (Rush) and his folks have been wonderful to me. They have become some of my closest friends in the world. We want to get the word out that Rush, as well as the entire trucking industry, needs technicians. Rush Truck Centers is a leader in the trucking industry and the largest commercial dealership network in North America. They want to train these folks and give them good jobs. I’ve been around a lot of them in the last few years and it’s a hell of a career.”

All-Time Victory List: With 10 career victories, Bowyer is in a 59th-place tie on the all-time wins list with Donnie Allison and Sterling Marlin.

Last week at Martinsville: Bowyer started seventh and finished fourth in the first stage. He moved to second in the middle stage, turning laps as fast as the leaders. At the race’s halfway mark, Bowyer pitted twice for a cut tire that dropped him two laps behind the leader. Things got worse late in the race when a broken track bar sent the No. 14 to the garage and left him with a 35th-place finish.

Bowyer at Texas in April: Bowyer started 25th and quickly showed speed, telling his crew, “This is the best we’ve been all weekend, boys.” Bowyer climbed into the top-five and moved into second in the race’s final 50 laps. Despite a quick fuel-only stop with 16 laps remaining, Bowyer couldn’t catch race-winner Denny Hamlin. The second-place finish was Bowyer’s best ever at Texas and best of the 2019 season.

Bowyer at Texas in November 2018: Bowyer started second but he and Denny Hamlin made contact on the first lap. Both were forced to pit lane for repairs and Bowyer dropped two laps behind the leader. The team took several chances to return to the lead lap, but ultimately fell four laps behind the leader and finished 26th.

Bowyer at Texas in April 2018: Bowyer started third and finished sixth in the first stage despite telling the crew he nearly spun two or three times because of a loose-handling car. The crew corrected the problem and he finished fifth in the second stage, closing in on the leaders as the laps wound down. His day nearly ended when the leaders crashed starting the final stage, and he climbed as high as fourth with 80 laps remaining. He was then pushed to the higher groove, dropping him to 11th. An untimely caution with 30 laps remaining dropped him a lap down. He made up the lap and raced in ninth when the checkered flag fell.

SHR has three Cup Series victories at Texas among his 12 top-fives and 29 top-10 finishes in 66 starts. 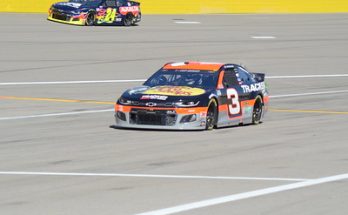